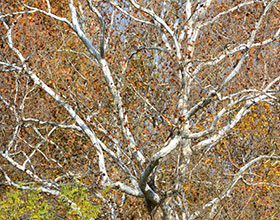 Sycamore trees are easy to spot on the landscape. Sycamores thrive in well-drained riparian (streamside) soils, and from the air they are conspicuous as large white sentinels marking the paths of creeks and rivers. On the ground, even in summer but especially in the leafless woods of winter, the sycamore’s pale bark stands out among the surrounding trees.

The local native tree that we call “sycamore” is Platanus occidentalis, the American sycamore. Confusingly, though, in England our sycamore is called a planetree, and “sycamore” refers to a species of maple, Acer pseudoplatanus. Maples and sycamores resemble each other in having leaves with several pointed lobes, but in fact, they are not closely related. The several tree species in the genus Platanus actually are related most closely (technically, in the plant order Proteales) to a variety of rather exotic plants that look nothing like sycamore trees, including the local American lotus and proteas (often used as decorative cut flowers) native mostly to Australia and South Africa.

As noted above, the most obvious distinguishing feature of sycamores is their bark. As the trees grow, the upper trunks and branches shed plates of dark outer bark, exposing the lighter-colored layers beneath. Successive bouts of exfoliation leave a mottled pattern that resembles camouflage gear. The benefits to the tree of shedding bark remain unclear. One possibility is that it removes pests from the tree surface. However, a recent study found that sycamores did not host fewer climbing vines than other nearby non-shedding trees. It’s also possible that the exposed inner bark has the potential for photosynthesis that supports tree growth. Indeed, sycamores are among the fastest growing of our trees and achieve the largest diameter, and possibly the greatest total bulk, of any temperate hardwood.

The bark of sycamores contains bioactive chemicals that might deter both pests and the growth of competitors under the canopy. Native Americans and early European settlers used sycamore bark as a cold remedy and for treating a variety of gastrointestinal and respiratory maladies. More recently, extracts of sycamore bark containing betulinic acid have been shown to have anti-anxiety properties, potentially helpful for both people and their pets.

Despite those chemicals, sycamores are susceptible to infection by anthracnose fungus, especially during cool, wet days of spring. Substantial amounts of new spring growth may be killed off as a result. The regrowth that follows contributes to the trees’ characteristic gnarly configuration.

In winter, one additional feature of sycamores is prominent. That is, they are adorned with inch-diameter balls of seeds hanging from stems at the ends of each small branch. Each seed ball has three components. The seeds themselves are interspersed with “fluff” that aids in dispersal once seeds are released. All of that is attached to a hard, pea-sized central core, sometimes referred to as a “pioneer button,” in reference to one of its historical uses. After the seed balls drop and the seeds fall away, the ground under a sycamore can be littered with those buttons.

Seed balls mostly are held on the tree through winter and released in spring. Each ball contains 1000 or more seeds. With thousands of fruits on a mature tree, a single sycamore can produce on the order of five or ten million seeds in a single season. Imagine if all of those seeds survived to produce trees—the landscape would be covered in nothing but sycamores! Alas, the vast majority of seeds are eaten, float away to unsuitable habitat, die off as saplings, or otherwise disappear from the pathway to adulthood. Such is the basis for natural selection, as Charles Darwin recognized: many potential offspring are produced, but only some, with traits that allow them to survive, grow, and reproduce, contribute to the next generation.

Their broad crowns and waterside habitat make sycamores attractive to a variety of wildlife. The large branches provide suitable support for the bulky stick nests of hawks and eagles, and the cavities that often form in older trees serve as nesting sites for wood ducks and as refuges for squirrels, raccoons, and other critters. Parula and yellow-throated warblers, which favor riparian habitat, have an especially strong affinity for sycamores.

Sycamores don’t produce the most colorful autumn foliage, but their pale, mottled, gnarly trunks create beautiful patterns that highlight the changing seasons. Look for them as you wander the woods. And if you’re ever lost on one of those walks—search out the sycamores, they will lead you to water!