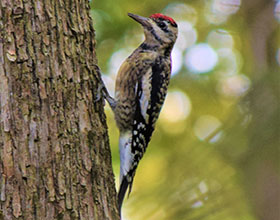 Southwest Ohio is home to seven species of woodpeckers. Six of those species—downy and hairy, red-bellied and red-headed, pileated and flicker—are year-round residents, and most of them are common in woods and neighborhoods and at feeders. But the seventh species, with a name that sounds like a joke (or maybe an insult!), is a seasonal visitor to this part of Ohio and is probably the least known of the group. Meet the yellow-bellied sapsucker.

During the summer breeding season, yellow-bellied sapsuckers are birds of the northern forests, occurring across the width of Canada and in the northern reaches of the midwestern and northeastern US. The sapsuckers that we see in southwest Ohio mostly are in transit, migrating between those northern breeding grounds and their non-breeding habitat further south. However, some sapsuckers spend the winter in Ohio. Because females of this species migrate further south than males, the birds that one encounters during winter in Ohio most commonly are males.

Yellow-bellied sapsuckers are immediately recognizable as woodpeckers. They climb up trunks and along branches, using stiff, pointy tail feathers for support. Like other woodpeckers, they have a roller-coaster pattern of flight, alternating flapping with tucked-wing glides. And like most of our woodpeckers, they are mostly black and white, with red highlights. For sapsuckers, that includes a white stripe visible on the black wings both in flight and at rest, a boldly striped face, and a red cap. Males also have a red throat and, often, a yellow(ish) belly.

While sapsuckers are typical woodpeckers in many ways, they also have a number of distinctive features. For example, their long-distance migration is unusual, and they hammer out their nest holes in live trees (often softened by fungi) rather than in dead wood. The most distinctive sapsucker feature, though, is their diet. For much of winter, while sapsuckers reside in Ohio, the birds feed on a combination of insects and fruits, like other woodpeckers, and they will come to bird feeders for suet. However, as days lengthen in later winter and sap begins to flow in trees, sapsuckers live up to their names and develop a sweet tooth.

Sapsuckers drink two forms of tree sap. (They don’t actually “suck” the sap. Rather, they lap it up with a finely fringed tongue. Yellow-bellied saplappers?) Xylem sap flows through the more interior fluid-filled tubes in trees, the xylem vessels. Ordinarily, xylem sap is drawn up the tree to deliver soil-derived nutrients to emerging new growth. But in a few species—most famously maples, but also a few others like butternut, beech, and birches—temperatures that alternate between sub-freezing and above-freezing drive a copious flow of xylem sap in late winter and early spring, before new leaves emerge. Under those conditions, xylem sap will leak out from sites of injury. Sapsuckers have figured that out, and they take advantage by hammering deep round holes into the xylem. Xylem sap at that time of year is relatively sugary compared with “normal” xylem sap—though the sugar content still is just 2 or 3 percent. (More than 95% of the water in maple xylem sap must be boiled off to create the rich maple syrup we enjoy.) So, sapsuckers drinking xylem sap need to lap up a lot of it to get enough energy (how much sap could a sapsucker lap…?), and they urinate away a lot of excess water in the process.

During the warmer months, when trees once again have leaves, sapsuckers turn to the other form of sap. Leaves use photosynthesis to generate sugar, and that sugar is circulated through the phloem to support growth and energy storage throughout the tree. Phloem vessels are located closer to the tree surface than xylem vessels, and so sapsuckers excavate rows of shallow, rectangular holes to tap that sugar-rich sap. However, phloem tubes are living structures (unlike xylem vessels), and they seal up after they have been injured. Somehow, sapsuckers keep the phloem sap flowing. It has been speculated that their saliva contains a compound that sustains the flow—something like an anti-coagulant.

The sap that exudes from the sapsucker holes, whether from xylem or from phloem, attracts numerous other critters as well, including squirrels, mice, and many kinds of birds and insects, among others. The sap-trapped insects in turn supplement the diets of both sapsuckers and of the other animals—sort of like eating breakfast sausages dipped in syrup! Ruby throated hummingbirds may even time their northward migration to coincide with sapsucker tree-tapping, since flowers are in short supply at that time of year.

Because their activities, including excavation of nest holes and tapping of tree sap, provide valuable resources to a wide range of other species, yellow-bellied sapsuckers are sometimes considered to be “keystone species,” a term denoting species of particular importance to the function of an ecosystem. Here in southwest Ohio, they are not as abundant as some of the other woodpeckers, but they are a fascinating member of the community. This winter, warm up on a hearty breakfast of pancakes with syrup, then head out to the woods to find the real experts at tapping trees for sap!