Honeybees and Bumblebees Prepare for Winter 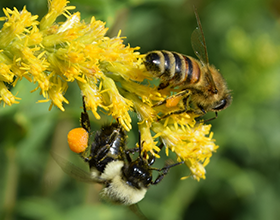 Honeybees (introduced from Europe to North America in the early 17th century) and bumblebees (several species native to southwest Ohio, including common eastern bumblebees, golden northern bumblebees, two-spotted bumblebees, and others) have a lot in common. Both types of bees are important pollinators of wild and agricultural plants. Both honeybees and bumblebees are social insects, meaning that they live in colonies where individuals have specialized roles. (Queens are females that lay eggs; workers are females that collect food for the hive and support and protect the colony; and drones are males that mate with queens.) Both types of bees have the ability, and the need, to warm themselves (more on that later). And both types of bees pretty much disappear from the local landscape during the colder months of the year. Despite those similarities, though, honeybees and bumblebees differ in some important ways, including their strategies for enduring winter.

Honeybees live in large colonies, consisting of a single queen, tens of thousands of workers, and hundreds of drones. Through spring and summer, the queen lays eggs that produce the next generation of honeybees. Workers nourish that reproductive effort by collecting pollen and nectar, which is fed to the developing young and stored in the nest as honey.

It turns out that many of these activities—including flying by the adults and growth of the young—only function well if the bees are warm. Honeybee adults are among the relatively few kinds of insects that are able to actively warm themselves. They do so by rapidly contracting their thoracic muscles without flapping their wings—in other words, by shivering. While out foraging, worker bees also generate heat from the exercise of flying. Actively foraging bees have body temperatures similar to our own, around 35oC (95oF). Back in the hive, the workers’ shivering is used to keep the developing brood similarly warm.

As fall arrives and temperatures cool, flowers and nectar become less available, and honeybee workers largely curtail their flights and stay home in the hive. Throughout the next few cold months, workers instead devote their energy to keeping their queen and brood warm. Drones are relatively unhelpful in this task, and workers kick them out to die. (Drones develop from unfertilized eggs; their population will be replenished next season.) The workers form a cluster around the queen and, fueled by stored honey, shiver through the winter to create a warm all-female hive. All that shivering takes a lot of energy, but if honey stores are sufficient then the queen and many of the workers can survive the winter, ready to begin another reproductive cycle when warmer weather returns.

Bumblebees, in contrast, live in smaller colonies, often below ground, consisting of a single queen and a few hundred workers. Bumblebee drones live independently of the colony. Like honeybees, bumblebees are able to warm themselves by shivering the muscles in their thorax. For bumblebees preparing to forage, that heat is retained in the thorax, where it activates flight. When they return to the nest to care for the brood, bumblebee workers instead circulate heat from the thorax to the abdomen, where it is used to warm the developing larvae.

The seasonal cycle of bumblebees differs from that of honeybees. Throughout summer, queen bumblebees produce offspring. Most eggs are fertilized and develop into female workers. Later in the reproductive season, some of those fertilized eggs are induced by a special diet to become new queens, and some unfertilized eggs develop as males (drones). Those drones leave the nest as they mature; their late-summer job is to fertilize newly emerging queens from other nests.

As the weather cools in autumn, almost all of those bumblebees die, including the drones, the workers, and the original queens. Only the fertilized new queens survive. Those queens, bearing the eggs that will found new colonies next spring, find an underground refuge to spend the winter. There, they hibernate, going cold but avoiding freezing, until warmer weather returns. Their low rate of metabolism in those conditions means that they can survive for several months without feeding. Come spring, each lone queen will begin to lay eggs. She will need to forage for food to nourish herself and her new offspring until enough workers mature to reestablish the colony and take over support of the brood.

The result of all this is that both honeybees and bumblebees are most abundant and visible in later summer, and both kinds of bees become scarce during the colder months. But during those “off months,” honeybees are hiding out by the thousands in their hives, shivering to keep themselves and their queen warm and cozy. Meanwhile, bumblebee queens are hidden away by themselves, cold and inactive.

The family trees (i.e., evolutionary lineages) of bumblebees and honeybees are thought to have separated about 100 million years ago. During the many years since that split, the two kinds of bees have retained a lot of shared characteristics. But a lot also has changed. There is no “right way” to be a bee, only a variety of ways that work. The details of that diversity provide no end of fascination.