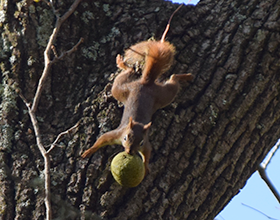 The chatter is unmistakable. All winter long, the woods have been full of American red squirrels, Tamiasciurus hudsonicus. According to Wikipedia, red squirrels are one of three species known as “pine squirrels,” and they are “widely distributed across North America wherever conifers are common.” So, what are they doing in the mostly deciduous woods of Centerville parks?

Red squirrels are easy to recognize. They are noticeably smaller than the common gray squirrels, just a little bit larger than chipmunks. The fur on their back and tail is a beautiful orange-chestnut color that contrasts with a white belly. And they have white “spectacles” that highlight big black eyes.

Red squirrels have recognizable behavior too. They are fast and acrobatic, so it can be a challenge to follow one as it scampers through the trees. And they are famously feisty, even aggressive. Red squirrels announce their presence with loud chatter, and they avidly chase gray squirrels out of their territory. No sharing for them!

Red squirrels do not hibernate. Instead, they build leaf-lined nests where they can stay warm during cold winter nights. And to meet their energy and nutritional needs through the winter, they store food. Unlike gray squirrels, which bury seeds and nuts in scattered locations, red squirrels are hoarders. They collect food during the autumn and stash it in a collective location called a midden, which may contain hundreds or even thousands of pine cones or nuts. (In a well-publicized 2021 incident, a North Dakota man discovered that a red squirrel had stashed 42 gallons of black walnuts inside his vehicle.)

As noted above, red squirrels are strongly associated with coniferous forests. In those habitats, they specialize in eating conifer seeds, especially favoring spruce. However, even in evergreen forests, red squirrels add other elements to their diet, including sprigs of trees like willows, various fruits and berries, and fungi.
Red squirrels also have another clever dietary trick. That is, they tap sugar maples for their sap. However, maple sap is highly dilute; a squirrel would need to consume many gallons of fresh sap to satisfy its daily energy requirements. So, red squirrels chew scrapes in trunks to let the sap run onto the tree surface, then return a day or so later, after the water has evaporated to concentrate the sugar. Basically, they make maple syrup!

Still, why are there so many red squirrels in our deciduous forests? At least two factors seem to be at work. The first is that red squirrels apparently are better than gray squirrels at dispersing into fragmented forest habitat. (Red squirrels disperse away from their mother’s territory in their first year, as they reach adulthood.) That has allowed red squirrels to expand their range in the mid-west, where forests often are fragmented into small woodlots among agricultural lands. The second factor relates to diet. Interestingly, even though red squirrels are strongly associated with pine forests, they actually prefer black walnuts to pine seeds when given the choice. Conifers still provide red squirrels with protection from predators like hawks and owls, and so red squirrels survive well in Midwestern woodlots, where conifers often are planted alongside native deciduous trees. Conifers also may provide food in years when walnuts are in short supply. But given the choice, red squirrels in mixed forests select hard nuts as their preferred food. Indeed, red squirrels in Indiana, where black walnuts dominate the diet, have evolved to have larger skulls, better able to open those hard nuts, than squirrels in Michigan, where pine cones are the main food.

The net result of all this is that red squirrels are continuing to expand their range in North America, out of the northern pine forests and into the midwest. While still considered to be “pine squirrels,” we now have robust populations of these engaging creatures in our largely deciduous parklands. Listen for the chatter, then prepare to be entertained!