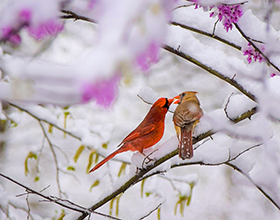 Spring is such a beautiful season. Color returns to the landscape, and birdsong fills the air. Even a late dose of winter sometimes just adds to the enchantment. In April 2021, at the peak of redbud flowering, a nighttime storm dropped several inches of snow on the south side of Dayton. The resulting landscape created scenes that looked like set-ups for a Valentine’s Day card! But beyond that initial impression, the images brought many questions to mind, including:

What kind of birds are these?

The Northern Cardinal, genus and species Cardinalis cardinalis, is the state bird of Ohio. The male cardinal, with its bright red feathers, black mask, and prominent crest, is one of the most recognizable local birds. Females sport just splashes of red, but their crest and orange beak are still easy to spot. Cardinals used to be considered as large finches, related to sparrows, finches, and other birds with sturdy beaks suited for cracking seeds. However, DNA evidence has revealed that cardinals are most closely related to a group that includes some of those seed-eaters (like our local indigo bunting and rose-breasted grosbeak) but also a bunch of tanagers (like the local scarlet tanager). Together, that group of birds is classified as the family Cardinalidae; sparrows and finches are in separate families.

Why are the two birds different colors?

Northern cardinals are sexually dimorphic, meaning that males and females have different appearances. This is true for many birds (e.g., mallard ducks and red-winged blackbirds) but not for others (e.g., robins and blue jays). For males, the bright coloration serves as a signal. Male cardinals often display from prominent perches, advertising their presence both to other males, who might be competitors, and to females, who might be mates. The brightness of the red coloration may even inform about the health of the bird. Females, on the other hand, are responsible for building the nest and incubating the eggs. At those times especially, but probably all year round, the duller coloration provides camouflage and safety among the vegetation. (Both male and female cardinals sing, so females do sometimes make themselves conspicuous.)

How does the male (but not the female) become red?

The cardinal’s red coloration comes from chemicals called carotenoids, similar to what gives carrots and tomatoes their bright colors. Cardinals need to acquire those pigment chemicals from their diet. Some foods, like dogwood fruits (a cardinal favorite), provide red-colored carotenoids directly. However, carotenoids in other foods, like sunflower seeds, are yellow or otherwise less colorful. Cardinals possess the mechanism (enzymes) to chemically transform dietary carotenoids into a red product.

Feathers can gain red pigment only when they are growing. Mature, fully formed feathers are non-living and cannot be brightened. In cardinals, feather growth occurs in late summer or early fall, during the annual molt that follows the breeding season. Thus, carotenoids acquired or produced at other times of year must be stored until it is time to grow new feathers. Both males and females molt, but only males produce the brilliant red plumage. Presumably, the acquisition, production, and/or storage of red pigment, or its distribution to developing feathers, differs between males and females.

How do cardinals stay warm in the snow?

An adult cardinal weighs about 45 grams—equivalent to about 3 tablespoons of water. Most of the bird is fluff! How does a small bird like that stay warm on a cold, snowy day? Two key features contribute. First, cardinals, like other warm-blooded (“endothermic”) animals, including ourselves, produce a lot of body heat from their own metabolism. As they sense cooler outside temperatures, their rate of metabolism—burning body fuels, like fats and sugars—increases so that they generate more heat. (Of course, that also means that they need to eat more food.) Second, bird feathers provide excellent insulation; think about the warmth provided by a down coat. Cardinals can further minimize heat loss by fluffing up their feathers and by roosting in dense vegetation when they are inactive.

What is this pair of birds doing?

The male cardinal in the picture is feeding seeds to the female. That behavior, called “allofeeding”, continues while the female constructs the nest and incubates the eggs, and during those times it may provide valuable nutrition for the busy female. But more generally, allofeeding is part of the complex set of behaviors (visual displays, songs, etc.) that helps to establish and maintain the bond between male and female. Cardinals may live for 5 to 10 years in the wild, and the same male/female pair may remain bonded over several years. Allofeeding supports the stability of that bond.

Cardinals add a splash of beauty and color to any landscape. But look beyond the initial visual impression, and they also stimulate interesting questions about the intricate mechanisms of nature. As the great physicist Richard Feynmann said about his thoughts on viewing a flower, adding a scientific perspective to one’s aesthetic appreciation, “only adds to the excitement, the mystery and the awe.”