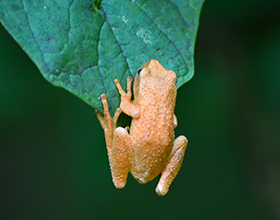 As humans, we are accustomed to having a relatively constant, warm body temperature. Whether it’s the middle of summer or the cold of winter, we steam right along at about 37oC (98.6oF), almost always warmer than the surrounding air. That body warmth is the result of our high rate of metabolism; we burn fuels (sugar and fat) fast enough to produce heat that keeps us warm, just as a car engine heats up as it powers the vehicle.

In contrast, frogs, like almost all animals other than birds and mammals, are ectotherms, meaning that they burn their body’s fuels too slowly to warm the animal. Instead, a frog’s body temperature depends on its environment. In summer, a frog takes on the temperature of the air while it’s on land (with some possible warming from the sun or cooling from evaporation) and of the water when it enters a stream or pond. At those summer temperatures, their body systems can function normally for locomotion, feeding, reproduction, and growth.

In the cooler seasons, though, there is little option to bask in warming sunlight, and frogs match their cold environment. A low body temperature results in a reduced rate of metabolism (as body chemistry slows down), and normal body functions become less active. Frogs can’t escape winter by migrating—their locomotor speeds are too slow for them to reach warmer weather—so they must tolerate the cold if they are to survive until spring. How do they do it?

The more aquatic “typical frog” species, like bullfrogs, green frogs, and leopard frogs, seek out water that’s deep enough to remain unfrozen, and they spend the winter hiding underwater. Because their rates of metabolism are reduced in the cold, so too are their requirements for oxygen, which is used to burn fuels. Cold frogs can acquire sufficient oxygen across their skin, directly from the water, without having to breathe air. Activity is minimal under those conditions—no feeding, not much movement, slow rates of breathing and heartbeat—and so the animals basically just go dormant until warmer days.

More terrestrial species, like toads and treefrogs, spend the winter on land. Toads are good diggers, and they burrow down to sites where the temperature remains fairly stable and above freezing. There, they just hunker down, inactive, for the winter. Treefrogs, on the other hand, are not good diggers, and so they shelter under tree bark or leaf litter. In those circumstances, they are more likely to encounter temperatures that drop below freezing. With their body temperature tracking the environment, how do they survive those sub-freezing conditions?

The answer is that a few species of frogs are able to survive being frozen, with up to 60% of their body water turning to ice. Several local species of treefrogs are in that freeze-tolerant group, including gray treefrogs, spring peepers, and chorus frogs.

Whole-body freezing creates a number of challenges. First, ice formation interferes with the body acquiring oxygen. A frozen frog stops breathing, has no heartbeat, and the frozen bloodstream does not circulate. Nevertheless, at those cold temperatures, metabolism is slow enough that the animals can tolerate the interruption to oxygen delivery.

A second challenge is that ice can be highly damaging to body structures (just think of its ability to split rocks or to carve out potholes). The key to survival seems to be controlling the location of ice formation in the body. Ice is tolerable only in the body fluids outside of the cells. If ice were to form inside cells, the crystals would tear them apart. Freeze-tolerant frogs are able to restrict freezing to those non-cellular fluids, and they also accumulate chemicals (usually glucose, sometimes glycerol) that protect the cells from freeze damage. (Biomedical freezing of tissues like embryos is done at ultra-cold temperatures—much colder than natural winters—that prevent destructive ice crystals from forming. But biomedical freezing does make use of freeze-protective chemicals, just like in the frogs.)

Despite these protective mechanisms, it is likely that frogs suffer some damage during bouts of freezing. Red blood cells, for example, are suspended in blood plasma that freezes solid; some of those blood cells probably are ruptured in the process. This might be particularly problematic if animals repeatedly freeze and thaw during periods of variable temperature, as commonly occur during Dayton winters. The ability to recover from tissue damage may determine how well frogs survive winter and resume normal function.

Interestingly, summer-active treefrogs are not able to survive freezing. Rather, freeze tolerance develops each year with the arrival of cold weather. So, what is it that changes to make the animals freeze-tolerant? We really still don’t know, but it probably involves changes in several body systems, including those involved in fuel metabolism, oxygen management, production and distribution of freeze-protective chemicals, and others. Unraveling the mechanisms of amphibian freeze tolerance may well provide clues to more successful biomedical cryo-preservation of complex tissues like kidneys or hearts. At the very least, it will help to explain one of the more spectacular feats of animal biology.