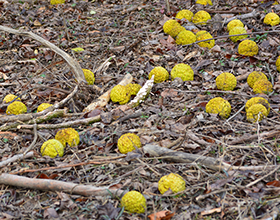 It’s been a good year for Osage oranges (Maclura pomifera). Now, in mid-to late-autumn, the grapefruit-sized “monkey brains” (as Osage orange fruits are commonly called) litter the ground, turning from chartreuse to brown as they soften and decay. What are these weird trees?

Osage orange trees are not native to Ohio. Rather, they originated in the south-central US, around Texas and Oklahoma. European settlers who crossed the Mississippi into that territory discovered that the Native Americans living there—the Osage Nation—highly valued the wood of a particular tree for constructing hunting bows. Those Frenchmen coined the name “bois d’arc” (wood of the bow) for the tree, and the simplified version of that term, bodark, remains in use, alongside Osage orange, hedge apple, mock orange, yellowwood and others.

Settlers subsequently discovered additional values for this tree. The wood is strong and flexible—ideal not only for bows but also for wagon wheels and axles. Osage orange wood also is durable and resists rot; it makes excellent fence posts and tool handles. And in the wilderness, Osage orange wood could be split and the interior wood splintered to build a fire, even in wet conditions. The dense wood (30% denser than oak) burns hotter than any other native tree. Beyond that, the hard, yellow wood is appealing for carving into pens, musical instruments, and other items, and it yields an attractive yellow dye.

More relevant to how Osage orange came to Ohio, the trees themselves proved useful. With their tangled growth form and sharp thorns, a close-grown row of Osage orange trees forms a nearly impenetrable barrier. As such, hedges of Osage orange were perfect for creating natural fences to define property boundaries and enclose livestock. Trees were planted across the Midwest for that purpose. The practice diminished after the introduction of barbed wire in the late 1800s, but windbreak hedges of Osage orange remain common in the Plains states. The trees we see in Ohio today likely derive mostly from those planted many decades ago for their utilitarian purposes.

Although the Osage orange name recognizes the fruit’s superficial resemblance to an unripe (large!) orange, the tree is not a citrus. Rather, it is in the Moraceae family, along with mulberries, figs and jackfruit. Like those other fruits, Osage orange fruits technically are “syncarps” or collective fruits, meaning they form from a cluster of fruiting flowers. Each of the individual fruits in that collective consists of an elongated green pulpy flesh, with a single seed buried in the fruit interior. The pulp produces a white latex that oozes out if the fruit is damaged.

Osage orange and related Maclura species have been used in folk medicine around the world, including by Native Americans. Chemicals isolated from Osage orange leaves, seeds and latex have potential value in treating conditions ranging from cancer and Alzheimer’s disease to gastric ulcers and viral or fungal infections. Extracts have been incorporated into health care and beauty products, too, and the fruits have been touted (with weak evidence) as insect repellants.

According to Wikipedia, Osage orange fruits have “a cucumber-like flavor.” However, they are generally considered inedible, for humans and even for wildlife. Squirrels do eat some of the seeds from rotting fruits, but hedge apples generally just lie in place where they fall.

Ordinarily, trees produce fruits as bribes to attract fruit-eating animals, which subsequently deposit undigested seeds in new habitat. In other words, fruits are a plant’s way of sending their offspring out into the world. So, why would a tree invest so much energy in producing large fruits with such limited attraction to consumers, and such limited dispersal ability?

Biologists believe that the answer lies in history. Fruits evolve alongside other members of their ecological communities. Osage oranges may not attract consumers today—but it wasn’t always that way. During the time of the most recent ice ages—known as the Pleistocene epoch—North America was home to a diverse array of large herbivores. Camels and llamas, giant (3 ton!) ground sloths, shrub oxen, woodland muskox, and mammoths and mastodons all roamed the countryside. These animals would have been fully capable of eating Osage orange fruits. Then, about 10-15,000 years ago, the continent’s large mammals mostly went extinct. That demise probably reflected the combined effects of human hunting—humans had recently arrived to North America from Asia—and climate change as the last ice age ended. Whatever the cause, mammoths and ground sloths disappeared; but the trees survived. And so Osage orange now is thought of as an ecological anachronism: a plant that remains alive and well, but whose ecological counterparts—the animals that ate its fruits and dispersed its offspring—are missing.

Osage oranges may yet enter the market as ornamental trees. There are separate male and female trees, and so male trees, which don’t produce fruit, are more desirable as plantings. Selective breeding also has made inroads at reducing or eliminating thorns, but with somewhat limited success. For now, Osage orange remains an interesting member of our forest communities, producing a notable THUD when it drops a fruit and serving as a reminder of our wild past. Next time you look at a fruit-laden Osage orange tree, just picture a mammoth strolling by for a snack!