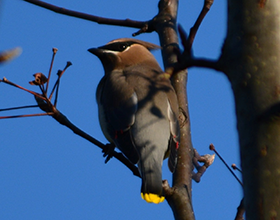 This winter, the edges of the wood are rich with fruits. Wild grapes, eastern red cedar, crabapple, dogwood, honeysuckle, bittersweet, and others all seem to have thrived. For birds that seek fruits for winter sustenance–robins, cardinals, white-throated sparrows, and others–that’s great news! But no bird relies on fruits more than the cedar waxwing.

Cedar waxwings are elegant little birds. Their sleek gray-brown body is adorned with a sharp crest, a dashing black mask, and a lemon-yellow belly. The tail ends in a bright yellow band, commonly described as looking like it was dipped in paint. And some adult birds feature the trait that provides their name: a few of the secondary (inner) wing feathers are tipped with bright red beads of wax that are readily visible on the closed wings. Those wax tips are laid down during molt, when new feathers grow in, and they are thought to function as social signals; more beads indicate a healthier, better-fed bird.

Fruit makes up nearly 85% of a waxwing’s annual diet, and for more than half the year, October through April, they eat fruit almost exclusively. The diet expands to include flowers and insects during warmer months. Fruits of eastern red cedar are a favorite diet item (hence “cedar” waxwings), especially in winter. Various species of crabapples and cherries are mainstays of the menu as well.

Fruit can be a challenging basis for a diet. Fruits do contain some valuable nutrients, like water and sugar. However, they are low in protein and they contain a lot of fiber, which fills the gut without providing nutritional value. How do waxwings adapt to these circumstances?

One basic strategy is that waxwings eat a lot. For example, they can consume more than 50 red cedar cones per hour. Waxwings have relatively short intestinal tracts and, as you might expect with their pulpy diet, fruits pass through the gut quickly. Cedar fruits are eliminated in about 12 minutes, and dogwood fruits in just half that time. (It’s also the case that a red cedar fruit that has passed through a waxwing is about three times as likely to germinate as one that falls directly to the ground.)

Despite that quick rate of passage and short gut, waxwings succeed in extracting a lot of the nutrients from their food. Waxwings selectively feed on fruits that are rich in sugar (in contrast to robins, which prefer fruits with higher fat content). In the winter diet, those sugars mostly are simple sugars (glucose and fructose, similar to honey), rather than more complex sucrose (table sugar). The advantage of simple sugars is that they can be easily and directly absorbed from the gut into the bloodstream. As a result, the birds are able to acquire something like 90% of the glucose and fructose that they consume.

Another challenge of being a strict fruit eater is that fruit abundance varies from place to place and year to year. Cedar waxwings do generally migrate southward during the winter, but they also wander the landscape in search of food. As a result, rather than being called migratory, they usually are described as “nomadic” (meaning that they follow their food supply in whatever direction that takes them) or “irruptive” (meaning that they sometimes appear in large numbers, and sometimes not at all).

Despite their lovely appearance, it’s easy to overlook cedar waxwings. They often hang out in the upper branches of forest edges, or they hide in shrubbery as they seek out fruits. But they almost always occur in flocks, rather than as individual birds, and their high-pitched calls give away their locations. So, keep your ears alert and then look for a small flock of birds perched in a treetop, or foraging among the fruits of a red cedar. If you’re lucky enough to see the birds up close, you’re in for a treat.