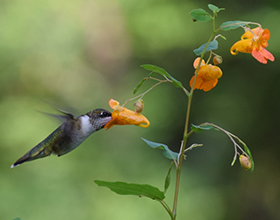 The parks of Southwest Ohio are home to two of the country’s smallest “warm-blooded” critters. Ruby-throated hummingbirds, Archilochus colubris, are conspicuous throughout the warmer months; least shrews, Cryptotis parva, also are common residents, though ¬much less visible. Adults of each of these species weigh in at a paltry 3-4 grams, barely more than a penny (2.5 g). That small size imposes some significant challenges. However, the two species solve those challenges in quite different ways.

When we call animals “warm-blooded,” what we really mean is that their metabolism produces enough heat to support a relatively constant high body temperature. Technically, that is referred to as endothermy. Humans are endotherms, too, and our normal body temperature is 37oC (98.6oF), significantly warmer—at least most of the time in Ohio—than the surrounding air temperature. It turns out that, despite their small size, least shrews and ruby-throated hummingbirds maintain body temperatures similar to humans—about 37oC for shrews, slightly higher for hummingbirds. Doing so requires a high rate of heat production. A small animal—or any small object—has a lot of surface area relative to its volume (or mass). Since it is the animal’s mass (muscle, liver, and other active tissues) that produces metabolic heat, the tissues need to work extra hard to offset all of the heat lost to the environment across the body’s surfaces. Indeed, the tissues of shrews and hummingbirds burn fuel at rates about 50 times as high as those in the much larger human. (To support that, they have heart rates up to 1,000 beats per minute!)

To fuel that high metabolism, shrews and hummingbirds need to feed at high rates. Both species may consume twice their body mass per day in food. However, their calories come from very different sources. Shrews are in the order Insectivora, and their protein-rich diet consists largely of insects and other invertebrates that they find in their tunnels under the leaf litter and dirt. Hummingbirds, in contrast, specialize in consuming flower nectar, which is largely just sugar water. Flower species vary in the concentration of sugar, but 40 – 60% sugar (several times as sugary as Coca-Cola) is typical. On the other hand, nectar has very low concentrations of amino acids, and hummingbirds need to catch an occasional insect to meet their needs for dietary protein.

Staying warm becomes increasingly challenging for these small endothermic animals as cool weather arrives and they lose heat even more quickly to the environment. Some small local endotherms—chipmunks, ground squirrels, some bats—solve that problem by giving up on high body temperature. Instead, they hibernate, allowing body temperature to drop for extended periods and, in the process, substantially reducing the rate of metabolism and the need for fuel. However, neither shrews nor hummingbirds hibernate.

For shrews, the strategy for winter is simply to keep on keeping on. Shrews remain active in their (possibly snow-covered) tunnels all through the winter. Their metabolism may need to increase in the cooler temperatures, but their habitat is well enough insulated that they don’t suffer the full cold of winter, and they are able to find adequate food to meet their metabolic needs. Although we rarely see shrews in winter, they are all around us, actively scurrying under the snow and fallen leaves through the season.

Hummingbirds, in contrast, give up on Ohio for the winter. (Ruby-throated hummingbirds have been sighted occasionally in Ohio through at least the first 3 weeks of October this year.) Whereas the short legs of shrews could never get them far from home, hummingbirds can fly with enough speed—about 40 km/hr, or 25 mph—that they can reach warmer southern wintering grounds within a few days. And while they may feed along the way—migration coincides with jewelweed blooming as they move south—even their small amount of stored body fat is enough to support a non-stop flight across the Caribbean. Once there, nectar feeding can continue. Amazingly enough, hummingbirds can sustain this extreme lifestyle—high feeding rates on a specialized food source, rapid heart rate, long-distance migration—for a long time; the oldest known wild ruby-throated hummingbird is nearly 7 years old. Shrews, in contrast, live for about a year.

In Aesop’s ancient fables, we often read of animals with opposing characteristics—the tortoise and the hare, or the ant and the grasshopper—that are thrust together by circumstances. Of course, those fables conclude with pithy moral lessons: “slow but steady wins the race”, or “work today to eat tomorrow”. “The hummingbird and the shrew” sounds like another fable in the collection. In this case, though, there is no winner or loser. Both of these small endothermic animals live precarious lives, pushing the limits of physiology. But both have evolved successful—though very different—solutions to that challenge. Evolution doesn’t produce one optimal solution, but rather preserves any trait that enhances survival and reproduction. Perhaps the moral to this story comes from a more modern fable, Jurassic Park: “Life, uh, finds a way!”