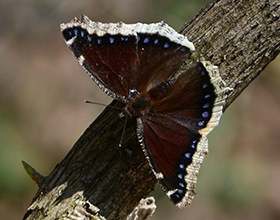 Spring! It’s the season when robins and red-winged blackbirds regale us with song and, in Ohio, when Hinckley welcomes back its turkey vultures. Who doesn’t look forward to the lengthening daylight and warming weather? But why wait for the robins and blackbirds, when earlier events can provide a head start to welcoming the new season?

Fully a month ahead of the returning vultures—even a couple of weeks before the aptly named harbinger-of-spring flowers poke through the leaf litter—the first wildflowers emerge in Ohio. Those early bloomers might not make great candidates for a kitchen bouquet—no showy petals or bright colors—but as skunk cabbages melt their way to the surface, they are sure signs of impending spring. Skunk cabbages, Symplocarpus foetidus, are in the Arum family (Araceae), in which small flowers are located on a fleshy stalk called a spadix. In a number of arum species, most of which are tropical, the spadix is thermogenic. In other words, just as in birds and mammals that maintain warm body temperatures, the mitochondria in cells of the spadix liberate cellular energy to generate heat. A skunk cabbage spadix can be more than 30oC (>50oF) warmer than the surrounding air temperature, and skunk cabbages even adjust their heat production to regulate spadix temperature as the environment warms and cools. But why spend all that energy to heat up? Arums often emit stinky odors that attract flies as pollinators. (In skunk cabbages, the leaves, too, emit a skunky odor when crushed.) Most likely, thermogenesis in arums evolved as a mechanism to volatilize and disperse their “aroma,” thereby notifying flies far and wide that they are open for business. But in skunk cabbages, which live in cold northern habitat, the heat provides an additional benefit, allowing the plant to melt its way through the snow as early as mid-February. Only the earliest insects are available to pollinate at that season. But spending energy to bloom ahead of everyone else allows the plant to monopolize those pollinator services.

Speaking of early insects: It is entirely possible that be a beautiful large butterfly might be found flitting above those emerging skunk cabbages, with flashes of blue and creamy edges adorning its mottled brown wings. Those butterflies are mourning cloaks (pictured above), Nymphalis antiopa. Where do they come from in February and March? Most Ohio butterflies die off in late summer and fall, leaving behind their eggs (as in some hairstreak butterflies), caterpillars (as in tailed blues and fritillaries), or chrysalises (e.g., swallowtails) to overwinter; development to adulthood comes with the return of sustained warm weather. A few others—monarchs and buckeyes, for example—fly south for the winter and return in spring. But a few species, including mourning cloaks, overwinter as adults in a dormant state called diapause, hiding in bark crevices and similar shelters. Whichever stage of the life cycle overwinters—egg, larva, pupa, or adult– must be able to tolerate the cold. And indeed, during the weeks preceding winter dormancy, mourning cloaks become tolerant of whole-body freezing, which in insects typically involves the accumulation of cryoprotective compounds like glycerol. If a spell of warm weather arrives in late winter, the butterflies may thaw and become active. Of course, there are no flowers blooming yet—except maybe the odd skunk cabbage—so mourning cloaks feed on tree sap, rotting fruits, and similar fluids. When the temperature drops again, they return into dormancy. By the time warm weather really arrives and it’s time to mate and then give way to the next generation, mourning cloaks may have lived 10 months or more, among the longest lifespans of North American butterflies.

Finding food in the winter is a challenge for any animal, and along with the cold temperatures, it would seem like a tough time to raise a family. Despite that, there are animals that make it work. Among those are the earliest breeders of the local birds. Great horned owls, Bubo virginianus, may lay their eggs as early as January or February and rear their young in advance of the coming spring. These largest North American owls have among the most diverse diets of any hawk or owl. Prey items may include large insects and spiders, crayfish, frogs and snakes, all sorts of mammals ranging in size from mice to skunks and woodchucks (adult owls weigh about 1.5 kg but can carry up to 3 or more times their weight), and other birds, even including other owls. How do these nocturnal raptors find enough food to feed themselves and their chicks during the last weeks of winter? One benefit of early nesting is that there are a lot of hours of darkness. And so part of their strategy is to prey on other animals that are active through the winter nights, such as flying squirrels, rabbits above the snow and voles tunneling underneath (detected with the owls’ keen hearing), and perhaps the occasional other owl. In addition, if necessary, great horned owls will extend their foraging activity into daylight, when squirrels and crows, among other potential prey items, are active. Their large size does help great horned owls stay warm, but the ability to raise a family in mid-winter mostly depends on fine hunting skills and a flexible menu.

For each of these spring early risers, the key to success lies in being able to take advantage of “marginal” conditions—periods of cold, or intermittent warm spells, or limited daylight—that other organisms cannot. It is interesting to consider that the traits providing that edge do not entail major evolutionary innovations. Great horned owls are carnivores like other owls, but with more expansive diets; mourning cloaks have traits (glycerol accumulation, cold-dormancy) present in many other butterflies, but extended into the adult phase of the life cycle; and skunk cabbages co-opt a trait (thermogenesis) that is present in related species, albeit used for other purposes. Natural selection—the “survival of the fittest” that drives Darwinian evolution—typically works upon a framework of variations within existing traits. Major innovations are rare, but sometimes even a small variation can provide a significant advantage that opens up new opportunities. The cold of winter imposes substantial challenges for living organisms. The ability to meet those challenges apparently requires combinations of traits that appear in just a small subset of plants and animals. But in the cold weeks of February, those exceptions to the rule provide welcome hints of things to come.