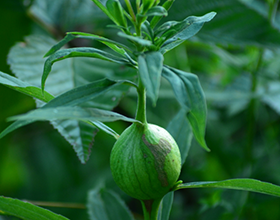 In late summer, at their colorful flowering peak, goldenrod (Solidago) flowers provide an important source of nectar for the late-season activities of butterflies, bees and wasps, flies, and other insects. But even in winter, when the plants have long since dried and browned, a few insects continue to call goldenrod home. One of these, the goldenrod gall fly, Eurosta solidaginis, is at the center (literally) of a lot of interesting science and nicely illustrates the notion succinctly stated by pioneering conservationist and writer Rachel Carson: “In nature, nothing exists alone.”

Goldenrod gall fly adults are short-lived. During their two-week lifespan in the spring, their only mission is to mate and lay eggs. (They really do little else. They are weak fliers, so they don’t move far, and they have no mouthparts, so they don’t feed.) Those eggs are laid on the goldenrod stem, where they hatch into larvae that burrow into the stem interior, usually just one per stem. A secretion from the larva induces the stem to accelerate local growth, and the result is a swelling that grows to about 2 cm diameter, green in summer, then turning brown in autumn. The exterior of the gall is hard and woody, but the interior is softer and nutritiou¬¬s. The larva feeds on that inner tissue during summer, creating a chamber where it matures and grows to about 0.5 cm length. At the end of summer, when it has reached its last larval stage (the third instar), the larva chews an exit tunnel from the gall center to just under the surface. It then retreats into the central chamber and enters a dormant phase—diapause. In spring, the larva resumes development, first to a pupa and then an adult. The adult pushes its way through the cap on the exit tunnel (it can’t chew its way out since it lacks mouthparts, so it creates pressure by inflating a structure between the eyes) and emerges onto the plant surface.

Goldenrod galls are easy to spot in a field of winter stems. And if you cut a winter gall in half, you will readily discover the plump little larva inside. In the process, you will notice that the gall is hard and woody, and you would probably guess that it provides a secure hideaway for the larva. Despite that, gall fly larvae are subject to a number of challenges.

One of those challenges comes from parasitoid wasps. Two species of wasps (Eurytoma gigantea and E. obtusiventris) target goldenrod gall flies. The female wasp extends its long ovipositor into the relatively soft green gall and lays an egg. That egg then hatches into a wasp larva that infiltrates and feeds on the developing fly, killing it in the process. The following spring, instead of a fly emerging from the gall—out comes a wasp.

Another threat to gall fly larvae comes from avian predators in winter. Downy woodpeckers in particular avidly seek out gall fly larvae. The woodpecker finds a gall, chisels a hole into the center, often targeting the insect’s exit tunnel, and eats the nutritious prey. In different meadows, anywhere from very few to nearly half of all gall fly larvae are eaten by woodpeckers. Predation is particularly intense for large galls on tall stems—whereas wasps, as it happens, prefer to attack smaller galls.

The third threat to gall fly development comes not from the biological world but from the physical. Galls often are positioned well above the snow line and, as such, are exposed to the full brunt of sub-freezing winter temperatures. However, while gall fly larvae will die if frozen during summer, they become freeze-tolerant during autumn. By winter, they survive freezing of more than 60% of their body water at temperatures down to -25oC or lower. That tolerance may be related to the accumulation of unusual lipids, acetylated tryacylglycerols, that have particularly low melting points and so remain liquid at low temperatures. Freeze tolerance also is supported by synthesis and accumulation in the insect’s tissues of the compounds glycerol and sorbitol, which protect cellular structures from freeze-induced damage. In addition, at least some cells in gall flies can survive ice formation inside the cell (as opposed to just freezing of fluids surrounding cells); even in other freeze-tolerant organisms, that circumstance commonly is damaging.

The traits exhibited by goldenrod gall flies have evolved as outcomes of the flies’ interactions with their living and physical environment. In the face of those interactions, any particular trait may provide both benefits and costs. For example, the ability to induce gall formation provides the gall fly with a protective environment and a built-in food source. On the other hand, that same trait, development within a gall, provides an easy target for parasitoids and predators and prevents the gall fly from escaping winter’s cold. Each of the other “players” in this “game”—the plant, the wasp, the bird—likewise has traits, some shaped by interactions with the fly, that allow it to survive and reproduce, but at certain costs. As environmental conditions vary—the numbers of birds and wasps, or the temperature and precipitation, for example—the traits that are beneficial and are passed on to the offspring also may shift. The result is that organisms and their traits also change over time. Evolution, like ecology, is all about connections. “In nature, nothing exists alone.”