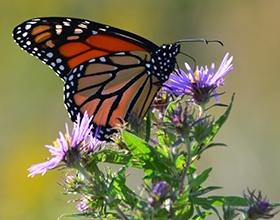 With the season of diminished daylight upon us, the shift from summer wildlife to winter wildlife is pretty much complete. Insects have substantially disappeared from the meadows. You’re not likely to see a snake in your path through the woods. And hummingbirds have long since stopped appearing at feeders. Where have all those critters gone?

There is no single answer to that question. Many of the insects have died, leaving their eggs and larvae to survive the winter. Reptiles and amphibians largely have sought out sub-surface refuges protected from the coldest temperatures. Robins and bluebirds have retreated from the meadows into more sheltered forests. But for some animals, the answer is that they have moved out or in, migrating between their summer breeding grounds and their winter habitat. In southwest Ohio, many summer resident birds (hummingbirds, warblers, orioles, swallows, and others) and a few insects (monarch butterflies and green darner dragonflies, for example) leave for the southern US or beyond. Other species, including some common visitors to winter birdfeeders like dark-eyed juncos, pine siskins, and white-throated sparrows, arrive to Ohio from their breeding grounds further north.

The details of animal migration still hold much mystery. As recently as the 1700s, the best thinkers in Europe proposed that swallows (birds that, like here, are common in summer but absent in winter) spend the winter on the moon, or hiding in riverbeds. Now, we know that among Dayton’s summer-resident migratory animals, wood thrushes winter in the Yucatan region of Mexico, purple martins (a variety of swallow) in the Amazon basin of South America, and buckeye butterflies in the southeastern US.

A migrating animal has two fundamental needs. First, it must acquire sufficient fuel to sustain a long trip.  Some migrants fatten up before leaving and fuel their travels with stored energy. Amazingly, a bird as small as a ruby-throated hummingbird, with a lean body mass like a penny, can store enough fat—a few grams, equivalent to about a teaspoonful–to fuel a flight of 1000 miles (1600 km) or more. These tiny birds potentially can fly non-stop across the Gulf of Mexico to their wintering grounds in southern Mexico, where they resume their nectar diet. Monarch butterflies also winter in Mexico, but in contrast to the hummingbirds, they must feed en route. Monarchs actually gain fat during migration, which helps to sustain them during the winter when they feed little if at all.

The second fundamental need for a migrant is a map and compass; the animal needs to find its way back and forth between summer and winter ranges. Much remains to be learned about how animals accomplish those feats.  Studies of indigo buntings (common summer breeding birds in Dayton) in planetariums revealed that young birds learn the nighttime star patterns and can orient relative to the North Star. But they can find their way on cloudy nights, too. We now know that possible aids to avian navigation include geographic landmarks, the position of the sun, atmospheric phenomena, olfactory cues, the pattern of stars in the night sky, and the earth’s magnetic field.

One might think that a migrating animal would benefit, too, from following its experienced neighbors and relatives, so that migration routes could be learned from generation to generation. That might help long-lived animals that return each year to the same sites. But consider the monarch butterfly. Individual monarchs make the trip from Ohio to Mexico. On the northward return, though, those individuals breed in the southern US and then die; their offspring continue north. Indeed, the monarchs leaving Ohio for Mexico typically are about four generations removed from the individuals that departed the previous year. Next spring, the hummingbird at your feeder might be the same individual as last summer (wild hummingbirds can live for several years); but not so for the monarchs. That means that the entire southbound flock of monarch butterflies is “migrationally naïve.” And yet somehow their brain, the size of a pinhead, orchestrates the flight from here to there. (According to recent research, the monarch brain actually integrates a light-sensitive clock from the antennae with information from the eyes about the sun’s position.)

To me, the notion that a butterfly can chart a course from Ohio to Mexico is barely more plausible than that swallows fly to the moon. But we now know that it’s true. Ain’t nature amazing!