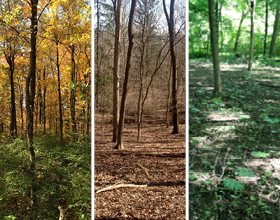 Honeysuckle was introduced in the United States in the mid to late 1800s as an ornamental plant. It has since become one of the most aggressive invasive, non-native plants in the state of Ohio. Honeysuckle shades out desirable native woodland plants, a problem for native wildlife that depend on native plants for food and shelter. As one of the first plants to green up in the spring, you are more likely to notice honeysuckle along roadsides and in local woodlands at that time. However, fall is the best time of year to make efforts to eliminate honeysuckle.

CWPD volunteers have contributed to the fight against honeysuckle. Local scout groups, park neighbors and volunteer groups from Yaskawa Motoman and Centerville City Schools have worked tirelessly to clear honeysuckle from Grant Park.

“The Centerville-Washington Park District appreciates the efforts of our volunteers to restore natural areas,” said CWPD Community Engagement Coordinator Ginger Clark. “We welcome additional assistance in the fight against this threat to the local ecosystem.”

You can help reduce the impact of invasive honeysuckle by volunteering to clear honeysuckle in your local parks. To get involved with efforts in Centerville, contact Ginger Clark at gclark@cwpd.org. In addition, removing honeysuckle from your own yard will keep this invasive plant from spreading to other areas.