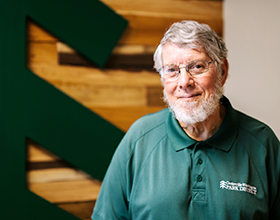 Alex Pearl has been appointed to serve a three-year term on the Board of Park Commissioners of the Centerville-Washington Park District. He will begin his first year of appointment as the Secretary of the Board. Mr. Pearl is the 17th individual to serve as a park commissioner since the district’s formation in 1959. He replaces Dr. David Lee, who retired from the board after his third three-year term, the current term limit.

Pearl has been an active community volunteer since his family arrived in Dayton more than 30 years ago. He became a volunteer with the Centerville-Washington Park District in 2011, after retirement from the Ohio Department of Rehabilitation and Corrections as a Career Technical Horticulture Instructor. Prior to taking a more active role in the Park District’s volunteer program, he provided advice and guidance to the educational programs. An active member of various trade and amateur horticultural organizations, Alex’s motto is “plants change lives.” He has had a long association with guiding cities to make them vibrant places to live and work through association with America in Bloom and Communities in Bloom. “I am honored to contribute to and be a part of the Centerville-Washington Park District!” Pearl says.

“We are pleased Alex Pearl is making the transition from a Park District volunteer to the Board of Park Commissioners. We look forward to serving with him and are thankful for his commitment to the community,” remarked Arnie Biondo, Director of the Centerville-Washington Park District. “We would also like to thank David Lee for nine years of leadership. Under his leadership, the Park District has earned over $3M in grants, added three new parks and many park amenities, expanded programming and was named one of the four best park agencies of similarly-sized communities in the nation!”