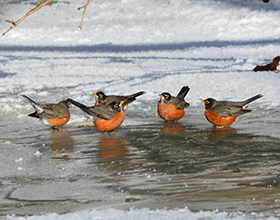 October is a transitional month. With the recent passing of the autumnal equinox, the sun now sits above the horizon for less than half the day. And as autumn marches on, temperatures drop. Together, these changes impose challenges for local birds. First, the shortening daylight provides less time to find food. And second, the amount of energy—and therefore food—required to stay warm increases as temperatures cool. These challenges are particularly acute for birds that eat invertebrates (insects, spiders, or worms, for example) because those food items become scarcer in the cooler weather. What’s a bird to do?

The everyday American robin provides lots of answers to that question. Robins are one of the most abundant birds in North America, and one of the most familiar. Their commonness might make them seem a little boring. But no! Robins have all kinds of tricks “up their wings” to deal with the challenges of the changing seasons.

One obvious option for a bird facing seasonal hardships is to leave town for more favorable surroundings. Migrating south addresses all three of the relevant issues, providing more daylight, warmer temperatures, and more insects. And indeed, many birds do migrate south in October, into and out of Ohio. The robin’s scientific name, Turdus migratorius, suggests that it is, in fact, one of those migratory species. (The genus name, Turdus, comes from the Latin word for thrush, the family of birds to which robins belong.) However, the migration story for robins is not simple. Robins occupy most of the US and Canada during summer. Some of those birds migrate south in the fall, so that northern Canada empties of robins, and the southern US fills with them. But other populations of robins remain pretty much sedentary year-round. Nobody knows how a particular robin, or population of robins, decides whether or not to migrate. In southwest Ohio, it’s likely that many of our winter robins are the same birds that were here in summer, but they may be joined by others that have moved south for the colder months.

Robins that stay in Ohio for fall and winter must find a way to satisfy their hunger as worms and insects disappear. Their solution is to shift their diet. Robins are famous for eating worms, but during the warmer months their diet also includes a variety of insects (especially beetles and caterpillars) and some fruit. As the weather cools, that diet shifts to being nearly 100% fruit. Wild cherries, dogwoods, hawthorn, and others are among their favorites. Invasive honeysuckle can be an important diet item, too, and the proliferation of honeysuckle and its fruit may have induced more robins to overwinter in Ohio in recent decades.

Eating all of that fruit presents some digestive challenges. Whereas insects are rich in fat and protein, fruits have more water and fiber and most of their calories come as carbohydrates. To get enough of those calories, along with other essential nutrients, robins increase their rate of food processing. The rapid passage of fruit through their gut does result in some wastage, but it allows them to get at least most of the nutrients they need. Robins still may need to eat an occasional insect to meet their protein requirements. Interestingly, robins do not have the enzyme sucrase, which is needed to digest sucrose (table sugar). Fortunately, the fruits they eat mostly contain sugar as glucose and/or fructose, which robins can readily absorb and use.

All of that food fuels a high metabolism that allows robins to stay warm, with a body temperature slightly higher than ours. Reducing heat loss as the weather cools is thus an important priority for energy balance. A fresh set of feathers is one important way to achieve that. Robins replace their flight feathers in mid-summer, followed by new body feathers in later summer and early fall. That nice new down coat insulates well against the cold. Robins also reduce heat loss through behavior. They shift from being vocal, territorial individuals during spring and summer, singing from the treetops, to congregating quietly in flocks during colder months. Those flocks tend to hang out in the woods rather than in open fields, and they roost collectively in trees that provide shelter from wind. Those behaviors all help to reduce heat loss and thus conserve energy.

We tend to think of robins as harbingers of spring and as a part of the summer landscape. But take a walk in the woods of southwest Ohio during fall or winter and you’re likely to find yourself surrounded by a flock of robins. They might look like the birds you see in summer—that familiar brown back, dark head, and rusty breast–but their habitat preferences, their social behavior, their feathers, their diet, and their digestive physiology all have changed to accommodate the demands of winter. That “boring” everyday bird is actually quite the quick-change artist!