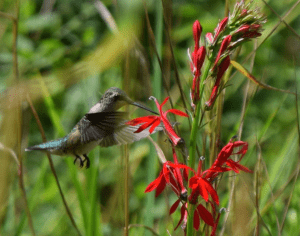 Many flowers produce both pollen and ovules, and so in principle, they can fertilize themselves. However, cross-pollination, where pollen is transferred from one plant to another, produces hardier, more genetically diverse offspring, and plants have evolved a variety of ways to accomplish that. One of the most important of those mechanisms, used by about 90% of flowering plants, is pollen transfer by insects or other animals.

Pollination represents a form of symbiosis called mutualism, in which both partners gain some benefit. Typically, that exchange of benefits entails “food for pollination services.” Plants produce nectar (a sugar-rich liquid) as a “bribe” to encourage insects to visit. While acquiring that nectar, insects pick up pollen (usually unintentionally, as it sticks to their body), some of which then transfers to the pistil of another flower when the insect moves on. It’s a win/win exchange.

Still, there are lots of variations on that theme. Local flora provide some great examples.

In some cases, the win/win relationship persists, but with extra twists. Cardinal flowers, Lobelia cardinalis, for example, send up a stalk of flowers that produce both male and female structures. However, those structures mature in sequence as the flowers age. Flowers lower on the stalk are older and have elongated female structures; flowers higher up are newer and produce pollen. Hummingbirds are attracted to the red flowers and tend to visit the stalks in a “bottom-up” pattern, seeking nectar from the older (female) flowers first. What that means is that after they visit the upper male flowers, picking up pollen as they feed, they move on to the lower flowers of another plant. In the process, they accomplish cross-pollination. How clever!

Evolution doesn’t always produce “happy” outcomes, though. Sometimes cheaters win! Traits that allow survival and reproduction will persist, even if that comes at the expense of one of the players.

Pollination of foxglove beardtongue (Penstemon digitalis), which blooms in local meadows through early summer, provides an example. Beardtongue has a deep white flower that attracts a lot of bees. Bumblebees are common pollinators, and it’s fun to watch them practically disappear inside the flower; they emerge with a belly full of nectar and a dusting of pollen on their fuzzy bodies. Carpenter bees also love to visit beardtongue. However, watch closely and you will see that carpenter bees never enter the flower. Instead, they straddle the blossom with their head at the base, near where it attaches to the stem. Then, they cut a slit in the base of the flower and drink the nectar directly, without ever encountering the pollen. Carpenter bees are nectar thieves! They take advantage of the flower’s reward system, but they steal the bribe without repaying the gift.

Pollination of Jack-in-the-pulpit, Arisaema triphyllum, offers an even starker variation—but one in which the plant is the winner. Jack-in-the-pulpit flowers occur on a stalk (the spadix) that is surrounded by a hood. Smaller plants produce male flowers, whereas larger plants produce female flowers. Jack-in-the-pulpits emit a scent that tricks fungus gnats into visiting. When the gnats visit the male plants, they explore deep inside, thinking they will find fungus (their preferred food). Instead, they encounter pollen, which sticks to their surface. When they try to escape, it’s too slippery to climb up, and the only available exit is a small hole at the base of the spadix. Later, they may try again to find food and instead enter a female Jack-in-the-pulpit. Again, they enter deep inside, in the process transferring pollen to the female flowers. The females, though, offer no escape. Instead, the gnats are trapped, and they die inside the flower. Talk about shooting the messenger!

Pollination systems represent great examples of ecological symbiosis (interaction between different species) and provide wonderful opportunities for watching evolution in action. Pollination of plants by insects is also incredibly important to humans. Insects are responsible for fertilizing about a third of all the world’s food crops. Whichever is your interest, you are well advised to pay attention to the birds and the bees.