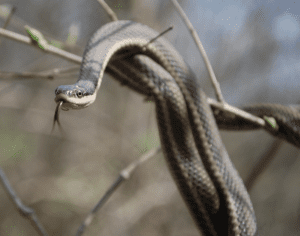 You may be familiar with the phrase “a snake in the grass,” an unflattering term for a sneaky person. In the CWPD parks, though, you are just as likely to encounter a snake in the bush, or a snake in the water. If you’re lucky, those encounters will be queen snakes, common residents around our local streams.

Queen snakes, Regina septemvittata, are medium sized, non-venomous snakes, typically 1.5 – 2 feet (50 – 60 cm) in length as adults. They are olive-brown above, with a cream-colored stripe extending down the body. The belly has four dark stripes on a creamy background, markings that help distinguish this species from similar-looking garter snakes. Young queen snakes also have additional stripes that tend to disappear with age; the species name “septemvittata” means “seven stripes,” referring to the juvenile appearance.

Queen snakes sometimes are known as olive water snakes, and they are most closely related to a more western species, Graham’s crayfish snake. Those two descriptors—water and crayfish—are critical to the life of queen snakes. Crayfish constitute about 95% of a queen snake’s diet, and so they live in waters—most commonly in rocky streams—where that prey is available. Even within that specialized diet, queen snakes are picky: they consume only freshly-molted crayfish with soft shells. (Crayfish shed once or twice per year to allow growth, each time becoming temporarily soft until they re-calcify their shell.) Queen snakes have flexible jaws, but they mostly avoid prey larger than about 60% of their gape area. If small crayfish are in short supply, the snakes may eat just the claws of larger specimens — not so different from humans eating lobster!

A queen snake’s body temperature is important for many of its bodily and ecological functions. One of those is locomotion, which is critical both for catching food and for escaping danger. Queen snakes are faster in the water than on land, but in both environments their speed increases three- or four-fold as they warm from 10 to 30oC. The ability to digest food also depends on body temperature. In garter snakes, for example, digestion is twice as fast at 30oC as at 20oC; the same is probably true for queen snakes.

The active season for queen snakes lasts only as long as they are able to achieve body temperatures near their preferred level. In the cooler months they hide out in a secluded spot, sometimes in groups of one or two dozen, where they cool to the temperature of their environment and wait for spring.

Queen snakes have a set of characteristics—small body size, relatively limited movement, specific habitat and dietary needs—that may reduce their risk from some forms of expanding human activities, like hazards from car traffic. On the other hand, that specialization also makes them vulnerable to habitat degradation. Our robust local queen snake population reflects that our creeks are clean and healthy. Long live the queen!