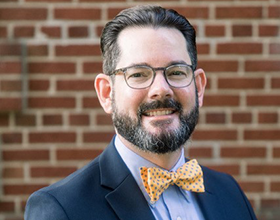 Jason Riley has been appointed to serve a three-year term on the Board of Park Commissioners of the Centerville-Washington Park District. He will begin his first year of appointment as the Secretary of the Board. Mr. Riley is the 19th individual to serve as a park commissioner since the district’s formation in 1959. He replaces Dan Monahan, who retired from the board after his third three-year term, the current term limit.

Originally from Millersburg, Ohio, Mr. Riley and his family adopted Centerville and Washington Township as their permanent home in January 2021 following his retirement from a 25-year career in the U.S. Army. The Army took Jason and his family across the U.S., Korea and Germany, including multiple deployments to Afghanistan and Qatar. Jason holds a B.A. from the University of Akron and Master’s degrees from the U.S. Army War College and the Naval Postgraduate School. He is active in local veteran and disabled veteran organizations.

The Board of Park Commissioners meet on the second Monday of each month at Park District Headquarters at Activity Center Park, 221 N. Main Street, Centerville. The 7 p.m. regular meetings are preceded by a work session at 6 p.m.