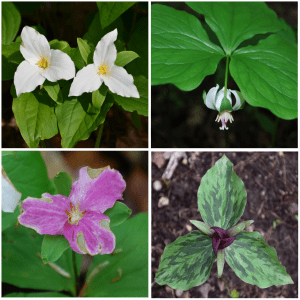 April and May are prime time for woodland wildflowers in Southwest Ohio. Among the dozens of species that bloom through the spring months—spring beauties, bloodroot, Virginia bluebells, trout lilies, May apples, and many others—some of the easiest to recognize are the trilliums. The name “trillium” incorporates the Latin word for three (“tri”), which refers to their most obvious identifying feature: that is, their single blossom has parts (petals, sepals) organized in threes, and likewise, the leaves (technically, bracts) also come three to a plant.

Those three trillium species are most easily distinguished based on two characteristics. The first is the presentation of the flower. In drooping and great white trilliums, the flowers sit at the end of a stalk (in botanical terms, they are “pedicillate”). In drooping trilliums that stalk hangs down under the leaves so that the flower, though quite large and beautiful, is hidden and easily overlooked. In contrast, great white trilliums project above the leaves, and populations of this species can present quite a show on a sunlit hillside. In the third species, sessile trillium, the blossom lacks a stalk and sits upright directly on the leaves.

The second identifying feature is the flower’s color. Great white trillium blossoms are—surprise!—white. Drooping trilliums are white too, though a somewhat creamier shade, often with minor reddish highlights in the center. Sessile trilliums are deep maroon, sometimes seeming to camouflage against the dappled underlying leaves.

Trillium flower color is not always constant, though. In some species, individual plants have unusual blossoms. Sessile trilliums populations may include a few yellow flowers among the red, and drooping trilliums occasionally have deep red petals. The situation is slightly different for great white trilliums. There, flowers may change color with age. Those large, shocking pink trilliums? They are older blossoms of the “white” Trillium grandiflorum.

What is the basis for these color variations? Flower pigments are produced by a series of chemical reactions within cells of the petals. Red and pink colors in trilliums come from a group of chemicals called anthocyanins—the same chemicals that lend color to red grapes and beets. In sessile and drooping trilliums, genetic mutations can affect the plant’s ability to produce these chemicals. It isn’t clear whether the resulting unusual colors reduce the attractiveness of flowers to pollinating insects. In contrast, some great white trillium flowers turn on the anthocyanin pathway (and turn pink) only when the flower is aging, well after pollination is completed. In that case, the flower probably is benefiting from the anti-oxidant actions of anthocyanins, which helps the plant to manage the stress of aging. The color change is just a side-effect that happens to be very pretty.

Trillium plants grow slowly, requiring five or more years to proceed from seed to flowering. White and drooping trilliums are pollinated by bumblebees and related insects, whereas flies and beetles visit sessile trillium flowers. After pollination, seeds takes two months or more to mature, so that they are ready for release in mid-summer. Trillium plants receive help in spreading their seeds from ants, which are attracted by an oil-rich structure called an eliasome that is attached to the seed. The ants carry the seeds to their nest, then consume the eliasome but leave the seed intact. Deer also can disperse trillium seeds. Deer like to eat trilliums, but the seeds can survive passage through their gut and go on to germinate. On the other hand, deer browsing also can significantly suppress growth and flowering of trilliums. The heights of trillium plants can even serve as an indicator of the intensity of deer browsing in a patch of woods: more deer equals shorter trilliums.

Trilliums and the other woodland wildflowers of this season collectively are called “spring ephemerals,” reflecting that they come and go pretty quickly. But a big patch of trilliums is well worth the effort of a walk in the woods. Get out and see them while they last!