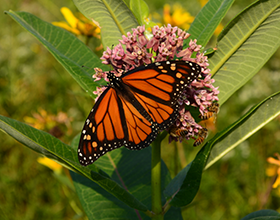 As the name implies, milkweeds – a group of plants in the genus Asclepias – are weedy plants. They are characteristic of disturbed habitats like forest edges and open meadows, and though they are perennials, they also produce copious wind-borne seeds and so can readily disperse and multiply. However, milkweeds also possess complex, attractive flowers in a variety of colors, they produce nectar that attracts a diverse insect community, and they are essential in the life cycle of the beloved monarch butterfly. Thus, despite their potential for “weediness,” milkweeds have become valued and widely planted garden plants.

Milkweeds derive their name from the white latex that exudes from most species’ leaves and stems if they are damaged. (Butterflyweed, Asclepias tuberosa, is an exception that lacks latex.) Latex is a complex emulsion containing compounds that coagulate upon exposure to air. The concentration of gum in milkweed latex is too low (about 2 – 3%, compared with 30 – 40% in latex from Brazilian rubber trees) to be commercially viable as a source of rubber. Still, the latex does have the potential to clog up feeding structures of herbivorous insects, and it functions at least in part as a defensive mechanism against those consumers.

In milkweeds, the latex and leaf and stem tissues (but not nectar), also contain toxins synthesized by the plant. Those toxins are primarily cardenolides, a steroid-based group of compounds within the cardiac glycoside family. Milkweed cardenolides exert their toxicity by inhibiting the function of a protein in animals—the “sodium pump”—that is critical to the function of nerve and muscle cells. (Sodium ions enter those cells as part of their activation mechanism, and the sodium pump helps the cells reset for another round of function.) Like digitoxin, in the same chemical family, milkweed cardenolides can interfere with diverse physiological functions.

The combination of latex and toxins is formidable; who would want to eat that?! And yet, several insects, including monarch butterflies, milkweed tussock moths, swamp milkweed leaf beetles, milkweed bugs and beetles, and milkweed aphids, specialize on milkweed as food during at least part of their life cycle. How do they manage?

The trick to preventing latex from “gumming up the works” is basically to avoid it. Latex circulates through the plant via channels that run through the veins. Some insects, like red milkweed beetles and monarch caterpillars, interrupt that flow by chewing through a leaf vein, then eat “downstream” from the leak. A second strategy, used by tussock moth caterpillars, is to eat just the leaf tissue between the veins, leaving behind a veiny skeleton and avoiding most of the latex.

Avoiding the toxins is less simple since they are found throughout the leaves and stems. In some species, the gut simply prevents the ingested toxin from entering the insect’s body. In a few species, like the milkweed aphid (introduced from Asia), ingested cardenolides are metabolically modified and then excreted. However, milkweed specialists of several varieties have evolved a different solution. That is, the structure of their sodium pump protein—the toxin’s target—is modified through a set of genetic mutations that changes the protein’s amino acid sequence. The cardenolide is less able to bind onto its target, and so the insect suffers minimized effects. The mutation may not be effective against all varieties of cardenolide, though, and even monarchs may need to convert some of those compounds to less toxic forms.

Given that tolerance, many milkweed specialists have taken things one step further. That is, rather than excreting all of the toxin that they ingest, they accumulate it in their bodies. In monarchs, the caterpillars sequester much of the ingested toxin into their integument, and as much as 70% of those toxins then is retained through metamorphosis. The adult thereby remains toxic even as it feeds on toxin-free nectar. In fact, research suggests that the ability to sequester toxins in the body may have been the evolutionary driving force behind the alterations in sodium pump structure.

Insects gain an obvious advantage from accumulating toxins. About 50 years ago, Lincoln Brower conducted a famous set of experiments demonstrating that blue jays learned to avoid toxic monarch butterflies. And indeed, insects that are specialists on toxic milkweed tend to be brightly colored (so-called aposematic coloration) as a warning to predators, who learn to leave them alone. Interestingly, milkweed tussock moths, whose caterpillars accumulate toxins just like monarchs, are nocturnal and eaten mostly by bats; bright colors wouldn’t help in this case, and so instead the boring gray moths emit a clicking sound that bats learn to avoid.

Milkweeds have traits shaped by the complex coevolution of plants and insects. Milkweeds need to attract insect pollinators, and they do so by producing showy flowers with nutritious nectar. On the other hand, they want to discourage herbivorous insects, and to do that they invest in latex and toxins. As insects have evolved alongside those milkweeds, a number have acquired traits that allow them to find and consume the nectar, but also to avoid, overcome, and even commandeer the defenses. Plant some milkweed in your garden, and not only will you support healthy populations of monarch butterflies, but you will gain a front-row seat to the evolutionary arms race. Got milkweed?