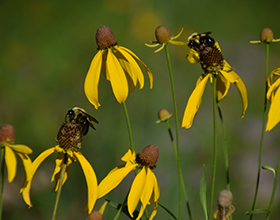 It’s the middle of summer; mosquitoes are buzzing, the nighttime chorus of crickets and katydids is picking up volume, and we’re just coming down from an emergence of periodical cicadas. It might seem like an odd time to be asking: Are there enough insects out there?

No doubt about it, some insects can be pests. We do what we can to keep mosquitoes from our patios and ants from our kitchen. However, insects play crucial roles in ecosystems. About three-quarters of flowering plants, and a third of all food crops, depend on animal pollinators—mostly insects—to reproduce. Moreover, because of their numbers and diversity, insects serve as food for all manner of animals and are critical links in food webs. Because of these pivotal roles, insect abundance is key to the stability and productivity of natural systems and agriculture. It should be no surprise that a 2017 study from Germany, indicating that insect abundance had declined by about 75% over 27 years, set off alarms. A recent collection of papers followed up on that finding, with the lead article calling the decline in insect populations “death by a thousand cuts.”

Perhaps the most widely discussed example of insect declines in Ohio and the US has been concern in recent decades regarding threats to honeybee colonies, including the phenomenon of colony collapse. Honeybees are not native to the U.S., and their populations are controlled substantially by human management of hives, like those in Bill Yeck Park. Nevertheless, the proposed causes for honeybee die-offs—including pesticides, parasites, changing land use practices, and disease—do raise red flags for other species, too. Broadly speaking, climate change, habitat loss and degradation, and agriculture (including pesticides and herbicides) are likely to be important stressors for many insect populations.

Alongside honeybees, native bees of many species are effective and important pollinators. In Ohio, that includes 20 species of bumblebees that have been reported historically in the state. However, a large state-wide survey in 2017-18 identified just 10 bumblebee species in nearly 25,000 observations. That survey provides a baseline for assessing bumblebee populations in the years ahead.

A group of insects that has near-universal public appeal and that is well suited to public monitoring is the butterflies. Who wouldn’t lament the loss of these insects, practically the symbol of ethereal beauty? And yet, we should not discount that possibility. The most recent survey of monarch butterflies in California reported a decline of 99.9% from the numbers 30 years ago, reduced from 4.5 million to just 30,000. In western Europe, butterfly numbers have declined by 50% in the past 45 years, and nearly one in ten resident species in the UK have gone extinct.

One of the best long-term surveys of butterfly numbers comes from Ohio. A 2019 report summarized the results from 24,405 butterfly surveys provided by trained volunteers from 1996 to 2016, as part of the Ohio Lepidopterists Long-term Monitoring of Butterflies program. Overall, for the 81 species analyzed, abundance declined at a rate of about 2% per year, with a cumulative 33% reduction over the duration of the study. Three times as many species declined in population as increased. You can join the Park District on butterfly surveys July 10 and/or August 7 to take part in this long-term project!

That trend seemed manifest in the Centerville parks and across Ohio in 2020. Numerous observers reported a paucity of butterflies; the big, obvious species, like swallowtails, red-spotted purples, and fritillaries, just seemed to be missing. The phenomenon was not universal across locations and dates, and the findings were not rigorously quantified. But still, it was a disconcerting season for butterfly lovers, who were left wondering whether the 2021 season would see a repeat or a rebound.

Defining and understanding these trends, in Ohio and elsewhere, will depend on the accumulation of data. Observations from the general public are likely to contribute importantly to that effort. iNaturalist, the repository for public records of species observations, is growing at a rate that likely will make it the largest single source of data on species-level occurrence of visually identifiable insects. Surveys with more standardized methodologies, like the North American Butterfly Association’s 4th of July counts, also will be critical.

So, as you wander the parks this summer, keep an eye out for butterflies—not to mention bumblebees, wasps, dragonflies, and other insects. Consider entering those observations on iNaturalist, where others can make use of them. At the same time, even if we don’t all come to love mosquitoes and dandelions, planting a few more flowers, and spraying a little less bug and weed killer, will help to boost insect populations and the ecological functions they support. The future of those summer pleasures—butterflies on the wing, and peaches in our picnic baskets—might depend on it.