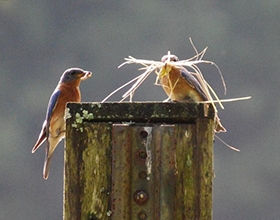 Birds’ nests serve a number of functions. One of those, of course, is to provide a secure place to lay and incubate eggs and, for many species, to raise young. In addition, the design and structure of nests may help to attract mates, discourage parasites, and regulate environmental conditions like temperature and humidity. Given those diverse functions, it is not surprising that nests are highly variable, ranging from simple scrapes in the ground to elaborate cups, platforms and baskets. In North America, about 15% of species are cavity nesters, laying their eggs in enclosed spaces.

North American cavity nesters represent several orders of birds. Locally, that includes woodpeckers, ducks (e.g., wood ducks), many owls, a falcon (the kestrel), and a number of passerines (perching birds), such as bluebirds, tree swallows, wrens, chickadees and titmice, nuthatches and prothonotary warblers. Only a few of those species, mostly woodpeckers, are “primary” cavity nesters, meaning that they construct their own nest cavity. The others either take over cavities abandoned by primary nesters or, more commonly, find cavities formed naturally by processes like tree rot and breakage.

Cavity nesting birds share a number of traits. Many have white eggs, presumably because there is no need for camouflage within the concealed nest site. In addition, cavity-nesting birds tend to have slightly higher clutch sizes (number of eggs laid per nesting cycle) than non-cavity nesters. Ecologists have debated potential explanations for this finding. One possibility is that cavity nests are easier to conceal and protect than open nests and so they suffer less predation. As a result, parents have a lower “risk-to reward” ratio from nesting and are able to invest in more offspring. Another possibility is that suitable cavities are a limited resource—there are only so many good nest holes in any particular habitat—and so a cavity-nesting bird that finds a good nesting site needs to take the fullest advantage of the opportunity.

Research suggests that in old-growth forests, with lots of large, aging trees, cavity availability does not, in fact, limit nesting. However, in managed landscapes nest-hole availability is critical. One of the most prominent examples of that relationship is the Eastern bluebird. With their beautiful colors and sweet sounds, bluebirds appeal naturally to humans. As the song lyrics say, “Life is sweet, tender and complete, when you find the bluebird of happiness.” And yet, over the past 100+ years, the push to clear forests for agriculture, and the forestry practice of removing old and dying trees and limbs, substantially diminished the birds’ natural nest sites. Bluebird populations declined by as much as two-thirds between 1950 and the 1970s. Numerous factors probably contributed, including not only loss of habitat and nest sites but also increased threats from cowbirds, raccoons, starlings, house sparrows, cats, pesticides and cars. Efforts to encourage construction of bluebird nest boxes, including by the North American Bluebird Society formed in 1978, led to a resurgence of bluebird populations, which now have recovered from those mid-20th-century declines.

The wood duck—beloved for its beautiful coloration, and also as a game species across the country—has a similar story. Wood ducks need relatively large tree holes for nesting, and these became rarer as woods were cleared. With the emergence of professional wildlife management in the mid-20th century, and the implementation of programs to install wood duck nest boxes, populations have surged and stabilized.

Purple martins—a species of swallow—provide one more example. Martins nest in small colonies, and both the availability of adequate natural nesting sites and competition from other species like house sparrows probably contributed to martins becoming more and more affiliated with humans. Today, purple martins nest almost entirely in artificial multi-compartment nest houses erected by people for that purpose.

One of the keys to establishing successful nest box programs was defining exactly what sorts of boxes would attract the desired species while discouraging competitors. Early versions of bluebird nest boxes often suffered from starling occupancy, as that introduced species aggressively out-competed bluebirds. We now know that entrance holes 1.5 inches in diameter effectively admit bluebirds while excluding the larger starlings.

For wood ducks, which are larger and prefer nests in the woods near water, Ducks Unlimited recommends a 4 1/2″ x 3 1/2″ oval nest box entry hole. Managers of those nest boxes also should provide nest box lining materials, like wood chips, since wood ducks will not provide their own nest materials. Other species that might take over these sites include screech owls, great crested flycatchers, and kestrels.

People often wonder what they can do as individuals to support conservation efforts. The success of nest box construction programs is one of the great examples of citizen action contributing to a large-scale conservation objective. Today, Irving Berlin’s lyrics once again describe Ohio’s suburban landscape: “Bluebirds singing a song, Nothing but bluebirds all day long.” Build, and enjoy!