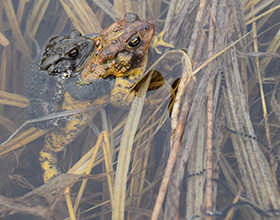 In some ways, frogs and toads (amphibians in the order Anura, meaning “no tail”) are visual creatures. Their eyes are finely attuned to movement, and they feed on insects that make the mistake of crossing their visual paths. But when it comes to reproduction, most anurans are all about sound. The croaks, trills, and grunts of frogs and toads at their breeding sites provide musical accompaniment for spring and summer.

Amphibians require a wet or moist environment for their eggs and larvae. Local frogs and toads mostly reproduce in still water, like ponds and wetlands, where they often congregate in large numbers during their breeding seasons. Here in the Dayton area, Western chorus frogs (Pseudacris triseriata) and spring peepers (Pseudacris crucifer) began calling in early March. A few weeks later, American toads (Anaxyrus americanus) join the chorus, and by May or June an active frog pond might include gray treefrogs (Dryophytes versicolor and chrysoscelis), green frogs (Lithobates clamitans), cricket frogs (Acris crepitans), bullfrogs (Lithobates catesbiana), and others.

Even a small pond might attract many hundreds of breeding frogs, and the collective chorus can be loud enough—100 dB or more at 1 m distance—to hear from more than a kilometer away. The calls of early arrivers even help guide other individuals to the pond. This mating system, where males converge and display to females in groups, benefits both sexes: males have numerous potential opportunities to mate (an individual male can mate with more than one female), and females can compare lots of males and select their preferred partner.

The idea that females select their mates from among a chorus of males suggests that males are variable in a way that females can detect. And indeed, even within a species, male vocalizations can vary in many characteristics, including location within the chorus, timing of call initiation, call duration, and call frequency and loudness. In some species, calls vary with temperature, but males also can adjust the timing and loudness of their calls in response to other callers. For example, frogs are adept at initiating their calls during quieter intervals between calls of neighbors.

Females must be able to detect those differences against a lot of background noise from their own species, other amphibians, and the broader environment. This challenge to auditory perception—how to isolate the sound of a single individual in a noisy crowd—is known in human studies as the “cocktail party problem.” Humans are quite good at this, and can carry on a conversation at a cocktail party, or listen selectively to a single instrument within a complex piece of music. As in humans, frog hearing is based mostly on the activity of specialized sensory cells—“hair cells” (unrelated to hair follicles)—each of which responds to a narrow range of frequencies. In frogs, these cells are housed in two inner ear organs, one (the amphibian papilla) with hair cells sensitive to low frequencies (~100 – 1000 Hz) and the other (the basilar papilla) that can detect higher frequencies typical of calls from males (1000 – 1500 Hz in bullfrogs, 2000 – 4000 Hz in some treefrogs). In contrast, human hair cells are housed in a single structure, the cochlea, but collectively can detect a wider range of frequencies (~100 – 20,000 Hz). Frogs may out-perform humans on some tasks, such as discriminating loudness differences between sounds. And frogs have some special mechanisms, too, like discerning directional origin of calls in part based on whole-body vibration—a form of seismic sensing. Although we know that frogs ultimately do “solve” the cocktail party problem—they find mates within the loud chorus—much remains to be learned about how the mechanisms of hearing relate to the behavioral responses.

So, male calls vary, and females can detect those variations. Do females have preferences? At least in some cases they do. For example, gray treefrog females may prefer calls with particular combinations of call duration and pulse rate, and American toad females mate preferentially with males calling at lower frequency. Those preferences make the most evolutionary sense if they reliably select males whose offspring are more likely to survive, reproduce, and pass on her genes. For American toads, the preferred lower-frequency call typically means a larger male, which may well signify good health. However, it is unclear whether large male size is associated with robust tadpole characteristics (like time to, or size at, metamorphosis), and little is known about how female choice relates to “quality” of her offspring or the extent to which those male traits are inherited.

Given that females have preferences, why don’t male frogs develop calls that are more and more eccentric, so that they more readily stand out from the crowd? Anuran vocalization is energetically expensive, and there may be limits to how long and loud a male can afford to call. Males also need to call within the detection limits of females, whose auditory systems are quite finely tuned. In addition, frog calls may attract more than just potential mates. Predators—larger frogs or herons, for example—may target conspicuous callers, and even parasitic flies that feed on frog blood find their meals by homing in on male calls.

So, male calling represents a tradeoff. On the one hand, competition for females drives the evolution of male characteristics that best attract mates; this is known as sexual selection. On the other hand, if those traits create risks to survivorship, such as by costing energy or attracting predators, then they will be disfavored by natural selection. The traits that we see today—all those grunts, trills, and croaks—represent the balance between those two forms of selection. The analogy of frog choruses to cocktail parties goes beyond just consideration of auditory processing!