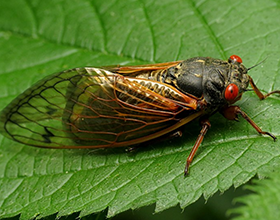 I have lived in Dayton, OH, since 1986. This May and June, for just the third time in those 35 years, I look forward to the spectacle of Magicicada Brood X, the 17-year periodical cicada. Across several eastern US states, billions of these 4 cm (1.5 inch) insects will emerge from the soil where they have been developing since they hatched from their eggs as nymphs, fell to the ground, and burrowed down back in 2004. The adult males among that throng of insects will vibrate their tymbals (drum-like membranes on their abdominal undersides) and create a collective buzz that will be hard to miss, as it can reach up to 100 dB in loudness, similar to a jackhammer or an outboard motor.

Periodical cicadas are fascinating, and much has been written about the phenomenon of their synchronized massive emergence: that there are several species and “broods” (synchronized populations) that emerge in different parts of the eastern U.S.; that they emerge on 13 or 17-year cycles; that with those long intervals from hatching to adult, they are the longest-lived insects; and that they can be cooked and baked into many nutritious, tasty dishes (!). But cicadas are fascinating in many other ways, too.

Cicadas are relatively large insects, and you might guess that they require a fairly energy-rich diet to acquire adequate calories. That is not their strategy, though. Both nymph (feeding on plant rootlets) and adult (feeding on above-ground twigs) cicadas are specialized for drinking from the fluids of plants. Interestingly, though, cicadas do not feed, like aphids, on phloem sap, which is full of nutrients descending from the photosynthetic leaves. Rather, they feed on xylem sap, which is quite nutrient-poor as it rises from the soil. Although some have speculated that the poor-quality diet accounts for the long maturation time of periodical cicadas, even annual cicadas, which can grow to equally large size in a single year, feed on xylem.

The ability to feed on xylem is associated with certain anatomical features. The labium (beak) of a cicada contains a stylet, which combines features of a needle (to pierce through to the phloem) and a straw. However, cicadas need to work to extract that fluid. Xylem sap is under negative pressure, as it is pulled up the plant by suction, driven by evapo-transpiration of water from the leaves. Cicadas therefore must exert their own suction pressure, which they achieve using large pumping muscles. The bulge of those muscles beneath the facial exoskeleton creates the nose-like appearance on a cicada’s head.

The xylem sap by itself provides an incomplete mix of organic molecules needed to build the insect’s tissues. Cicadas overcome that limitation by housing bacteria capable of synthesizing the required building blocks. In cicadas, those bacteria are largely endosymbiotic — meaning that they reside inside the cicada’s cells, rather than in the gut, as in termites and us. These “reduced” bacteria have genomes that are transitional between those of free-living bacteria and symbiont-derived cellular organelles like mitochondria. In long-lived periodical cicadas, the endosymbiotic bacteria are even more specialized, having evolved into a number of separate species, each with just a subset of the genes needed to survive. These bacteria are transmitted from adult to offspring inside the cicada’s eggs; a full set of bacteria must be incorporated to be successful.

Given the huge number of cicadas and their large size, a population of cicadas embodies a lot of energy and nutrients. These conspicuous insects make ready targets for many predators, including birds, mammals, and amphibians, and this pulse of food can influence bird populations for up to several years. But a cicada outbreak readily saturates the needs of predators. (That assured survival of some individuals is a benefit of synchronized emergence.) Thus, when the insects die off in mid-summer, after an adult lifespan of just a few weeks, a large flush of energy and nutrients enters the local ecosystem. That giant dose of “fertilizer” can increase the productivity of understory vegetation, of microbial communities in forest soils, and of nearby aquatic communities. Although these animals appear on the landscape for just a few weeks every 17 years, they have a large impact across the ecosystem.

The detailed structure of the insects themselves also is of interest. Engineers who look to nature for inspiration have discovered that the surfaces of cicada wings are constructed using periodic arrays of very small (“nanoscale”) non-close packing pillars. These structures create highly water-repellant surfaces that make the wings self-cleaning. In addition, the physical properties of those pillars are bactericidal, particularly against certain classes (gram-negative) of bacteria. Not all cicadas have the same wing structure. In the periodical cicada, Magicicada cassinii, the wings are not as water repellant as in annual cicada species, but the chemical composition of the wing surface is bactericidal. Research groups are actively exploring ways to mimic these properties in human-made materials, with many potential applications.

So, cicadas are studied as models for understanding the regulation of growth and lifespan, ecological dynamics, bacterial evolution, and nanoengineering. And yet, fundamental questions about cicadas remain unanswered. Why does it take them so long to develop from nymph to adult? What is it that synchronizes the 13 or 17-year life cycles across wide geographic areas? What is the significance, if any, of cycle lengths being prime numbers? Magicicada may not be magical, as the name seems to suggest. But they do present mysteries that are worth contemplating while snacking on some delicious Emergence Cookies (cicadas required; nuts optional) under the loud buzz of summer.