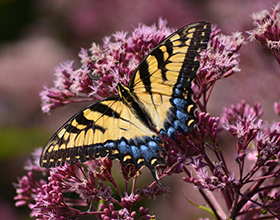 Tiger swallowtails are among the most recognizable of our local butterflies, maybe second only to monarchs. There are two reasons for this. First, with their large size and prominent pattern, their appearance is pretty unmistakable. And second, tiger swallowtails are widespread and abundant. Both of those features—abundance and appearance—come with some interesting biology.

Tiger swallowtails (technically, Eastern tiger swallowtails, Papilio glaucus) are the most numerous of the six swallowtail species in southwest Ohio (the others are the black, spicebush, pipevine, giant, and zebra swallowtails). In the summer, of 2022, for example, iNaturalist.com, the public database for reporting sightings of living things, received more reports of tiger swallowtails in Ohio than of the other five species combined. Why are tigers so much more abundant than the other swallowtails?

Tiger swallowtails have an advantage in being able to use a wide variety of plant species as hosts for their caterpillars. For most of our swallowtails, females only lay eggs on a very specific set of plants, and the caterpillars develop only there. For example, spicebush swallowtails specifically seek out spicebush and a few related species like sassafras; pipevine swallowtails seek out pipevine or its close relatives; and zebra swallowtails only lay eggs on (no, not zebras…) pawpaws. In contrast, tiger swallowtails are compatible with a wide range of common host plants, including tulip trees, white ash, cottonwood, willows, wild cherry, magnolias, and others. The basis for this broad array of hosts rests in a mutation to a protein (the enzyme CYP6 P450) that helps to detoxify plant chemicals, giving tiger swallowtails a broader detoxifying ability. Just a minor change in that one protein has helped to open great ecological opportunities.

Tiger swallowtails are big, black and yellow striped butterflies (“Tyger, tyger, burning bright,” in the words of William Blake). But not all tiger swallowtails look the same. Whereas males are pretty much black and yellow all over, females incorporate a beautiful iridescent blue pattern in the rear upper (dorsal) surface of their hind wings. That brilliant blue color does not come from any blue pigment; rather, it is structural, created by tiny scales that refract light and reflect out blue wavelengths.

Tiger swallowtail color also varies in another more dramatic way that does depend on pigment. That is, some female tiger swallowtails, rather than “burning bright,” are all black instead of black and yellow. The percent of black females varies across the eastern US, from nearly absent in some regions to nearly 100% in others. (They are relatively common in southwest Ohio.) What’s that all about? Why are only females, and only some females, black?

The basis for female-only black coloration lies in the genetic control of the dark pigment melanin. Butterflies, like humans, have two sex chromosomes. However, whereas in humans it’s males that have two different chromosomes (XY, vs. XX in females), in butterflies it’s females (called ZW in butterfly females, vs. ZZ in males). The production of melanin that colors dark-form female tiger swallowtails is controlled by a gene on the W chromosome; if that gene is active, then dark melanin is produced instead of yellow pigment. Since only females have a W chromosome, only females can be all-black.

So why aren’t all female tiger swallowtails black? The fact that the trait is common in some populations suggests that it provides some advantage. On the other hand, not all individuals have that trait, and so there may be costs to dark coloration as well. That trade-off between costs and benefits is likely to bear on two important aspects of the butterfly’s biology: its ability to survive, and its ability to reproduce. How might black wings do that?

Black pigment could affect survival in a number of ways. For example, it could affect the wing’s resistance to wear and tear (probably why so many butterflies have black wing edges), or it could influence the rate of warming in the sun (tiger swallowtails need to be warm to fly). However, the most widely accepted explanation is that black tiger swallowtails look like another swallowtail species, the pipevine swallowtail, that is toxic and distasteful to predators. Indeed, the percent of black female tiger swallowtails is highest in regions where pipevine swallowtails are more numerous. This phenomenon, where a harmless species gains protection by mimicking a more harmful one, is called Batesian mimicry. Viceroy butterflies, which mimic toxic monarchs, provide another example.

If black coloration provides all those potential benefits, why doesn’t the trait spread throughout the population, so that all female tiger swallowtails are black? The usual simple answer is that male tiger swallowtails, for some reason, prefer to mate with yellow females. “Sexual selection,” where traits persist because they promote success at reproduction, occurs in many animals; the peacock’s tail is a famous example. However, data still are not conclusive as to the strength of those male butterfly preferences.

The factors influencing yellow vs. black coloration of female tiger swallowtails may now be shifting. After many decades of stable populations, the numbers of dark females have declined in the past 20 years in several regions, including southern Ohio. One possible reason, among several, is that warmer temperatures may induce genetically black female caterpillars to develop into butterflies with intermediate coloration; those intermediates may be less successful at surviving, reproducing, and passing on their genes.

Who knew that the lives of tiger swallowtails were so complex? Host diversity, Batesian mimicry, sexual selection, gene mutations; it’s as though tiger swallowtails encompass an entire biology textbook! And indeed they do. There’s nothing prettier than a fresh tiger swallowtail, wings open on a flowering Joe-Pye weed. But dive a little deeper, and these beauties are full of secrets and surprises!