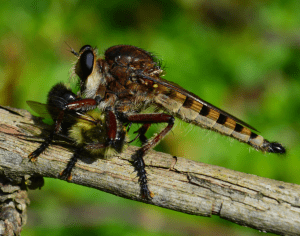 When you think about flies, you probably don’t think about descriptions like, “tremendous size and leg strength,” “potent saliva laced with neurotoxins,” “think fighter jet,” or “iron maiden death grasp.” Yet all of these phrases appear in postings about a pair of insect species—the giant robber flies—that frequent our local meadows in late summer. Clearly, these are no ordinary flies!

Technically, flies are members of the insect order Diptera. As that name implies (“di – ptera” literally means “two wings”), flies are characterized by having just a single pair of wings, rather than two pairs as in most insects. (In flies, the hind wings are modified into sensory organs called halteres.) The million or so species of flies are diverse, including such well known representatives as house flies, fruit flies, and mosquitoes. Robber flies, with their large wide-set eyes, bristly moustache, chunky midsection, and spiky legs, are distinctive.

Robber flies come in a range of sizes. At any size, though, they are fierce predators of other insects. Two local species–the cannibal flies Promachus rufipes, with black and yellow legs, and Promachus hinei, with red legs–are among the largest robber flies. At 35 mm (1.5 inches) in body length, they are truly impressive.

Robber flies are sometimes called assassin flies, consistent with their “sit and wait” strategy for hunting prey. That is, they find a perch and sit quietly, scanning their environment. When an unsuspecting insect flies past, any effort at stealth is abandoned. The cannibal fly takes off with an unmistakable loud buzz—like “a six-legged Sikorski Skycrane helicopter,” according to Jim McCormac in his Ohio Biodiversity blog. Learning to recognize that sound is a key to finding cannibal flies on the prowl.

The name “cannibal fly” implies that these insects feed on others of their own kind. Although that occasionally happens, cannibal flies eat pretty much any insect that flies, including bees, beetles, and butterflies. There’s even a report of a cannibal fly subduing a hummingbird! Wasps and bees are the preferred prey, though, and one name for Promachus rufipes is the “bee panther.” Both rufipes and hinei have striped abdomens that may resemble bees enough to fool those potential prey items into ignoring the danger lurking nearby.

Robber flies have notably large eyes that extend beyond the diameter of the head, creating a distinctive depression in between. Each compound eye contains thousands of individual lenses, which are larger in the front and center of the eye (the “acute zone”). This feature contributes to the flies’ high visual acuity. The Air Force has even funded research on robber fly visual systems, hoping to learn the secrets of how they track and home in on their prey.

Cannibal flies deploy a combination of weapons. First, they sometimes fly into their prey item at full speed, stunning them into initial submission. The robber fly then grasps its prey using strong, sharply barbed legs from which there is no escape. The prey item is carried back to a perch, where the robber fly inserts its sharp proboscis—a combination syringe and straw–and injects toxins (to paralyze the prey) and enzymes (to digest its meal into a liquid soup). Robber fly toxins have not been studied much, but they contain a complex mix of proteins and peptides with neurotoxic activity similar to that of some snake venoms.

At less than 2 inches in length, cannibal flies are top predators in their insect communities. They have evolved to have keen vision, a piercing grip, and novel toxins. Imagine how fearsome they would be if they were 10 times bigger! Why haven’t they evolved larger size? The answer probably lies in limitations of the insect respiratory system, which delivers oxygen by way of internal branching tubes (tracheae) connected to the outside air by openings in the insect body wall (spiracles). That system seems to dictate the maximum sizes that insects can achieve. At one time, 300 million years ago, Earth’s atmosphere had 50% more oxygen, and dragonflies reached wingspans of up to 30 inches (75 cm). Today, there are some insects bigger than cannibal flies, but not too much bigger. As we wander the late summer meadows, we can listen for the roar of cannibal flies and marvel at their predatory prowess. At the same time, we can be grateful that they aren’t the size of crows!