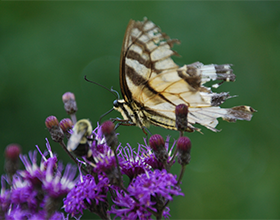 In Greek mythology, Icarus attempted to escape from Crete by flying to the mainland, using wings that his father crafted by waxing feathers to Icarus’ arms. However, Icarus flew too close to the sun, the wax melted, and the feathers detached; Icarus fell into the sea. Two millennia later, Dayton’s own Wright Brothers also looked to birds for inspiration, developing ideas about wing warping from observations of birds in flight. The simple take-home message from both of those episodes is the same: to achieve flight, wings need to combine appropriate characteristics of size and shape.

This time of year, birds and butterflies are putting those notions to the test. As autumn approaches, many birds, and a few insects, are preparing for southward migration. Surely that would best be accomplished with healthy, intact wings. However, these animals have wings made of relatively fragile materials—feathers of keratin for birds, chitinous membranes for butterflies—that have been subject to wear and tear through the active months of summer. By September, those wings may be beat up and tattered. How do they support the long airborne trip south?

Birds address this issue by replacing worn feathers. Although feathers themselves are non-living and not repairable, birds can shed old feathers and regrow new ones—much like hairs in a mammal. The pattern of feather replacement (molt)—both timing and extent—is quite variable among species. However, in species that migrate, one bout of molting typically occurs after the summer reproductive season and before migration. In many species, that molt accomplishes two functions. First, it provides a new set of feathers to support the southward flight. And second, it shifts the bird from its colorful reproductive plumage to less conspicuous colors for the non-breeding months of the year.

One group of birds that illustrates these patterns is the North American wood warblers. The northward spring migration of these colorful birds—black-throated blue, yellow-rumped, chestnut-sided, and many other species—is one of the great annual birding events in Ohio. On their return southward migration in fall, however, warbler identification presents a much greater challenge, as they shed their summer colors for drab, non-breeding plumage.

Surprisingly, the details of that late summer molt have been described just recently. It turns out that many warblers go through a rapid, intensive feather molt. For a period of two or three weeks in late summer, these birds shed and replace up to two-thirds of the feathers that power and guide flight, including simultaneous loss (and then replacement) of all 12 tail feathers and of 6 – 10 flight feathers on each wing. (You might find the shed feathers on the trails.) During that period, the birds’ ability to fly—and hence to feed and to escape predators—is seriously compromised, and so they skulk inconspicuously in the bushes. Once a fresh, new set of feathers grows in, the birds are ready for the long flight south.

Like birds, butterflies also have wings with no capacity for repair. Unlike birds, though, butterflies cannot shed and replace their wings. For most species, that might not matter so much; they are short-lived and die after the reproductive season, with no long migratory flights. Still, it is not uncommon to see butterflies with tattered wings in late summer; how does that affect their flight?

A few studies have explored that question by testing butterflies with naturally or experimentally damaged wings. In most cases, wing damage induces more rapid wingbeats, which compensates to allow relatively normal flight. Beyond that, though, even butterflies with 20% wing reduction apparently can get by reasonably well, with near-normal flight activity and survivorship.

If that’s the case, then why do butterflies have wings that are seemingly bigger than they need to be? The answer might still relate to flight characteristics; for example, the energy required to fly, or maneuverability in flight, might be influenced by wing area and shape. Butterfly wings also serve other functions, including as visual signals and as heat-absorbing surfaces. Those functions might have favored the evolution of relatively large wings.

Does wing reduction impede butterfly migration? It has been suggested that food shortages for monarch caterpillars could inhibit wing growth and potentially impair migratory flight. However, in pictures of those fantastic congregations of monarchs on their Mexican wintering grounds, wings look to be intact. Perhaps individuals with tattered wings fall by the wayside en route, or maybe migratory species have more resilient wings that resist wear and tear. Those are topics for further investigation.

The human urge to fly is deep-seated, and since ancient times humans have looked to nature for inspiration to realize that dream. As we continue to push the frontiers of flight—from miniaturized drones on Earth to helicopters on Mars—we will, no doubt, seek to float like a butterfly and to soar like an eagle.